Europe is currently facing a vicious, new form of international terrorism. The clear shift in Islamic State’s strategy of carrying out special forces-style attacks in the international environment, with a particular focus on Europe, as well as the growing number of foreign terrorist fighters, demonstrates the new challenges facing the EU and its Member States.

To ensure an effective response to these challenges, in January 2016 Europol created the European Counter Terrorism Centre (ECTC), an operations centre and hub of expertise that reflects the growing need for the EU to strengthen its response to terror.

Designed as a central hub in the EU in the fight against terrorism, the ECTC focuses on: 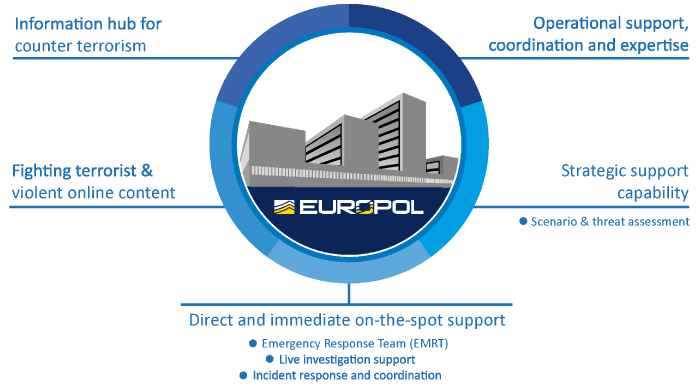 The ECTC’s principal task is to provide operational support to Member States in investigations following terrorist attacks. It cross-checks live operational data against the data Europol already has, quickly bringing financial leads to light, and analyses all available investigative details to assist in compiling a structured picture of the terrorist network.

The ECTC builds on Europol’s established tools and counter terrorism networks, which have already played an important part in the European response to terrorist threats, but includes a number of new features.

In the event of a major terrorist event, the ECTC can contribute to a coordinated response. Different teams are available for this purpose, often combined with counter terrorism experts temporarily seconded from Member States, depending on the nature of the event.

The ECTC’s specialist teams of analysts and experts collate operational information from law enforcement from all Member States as well as from third parties. The teams work on this information to establish the wider EU perspective on counter terrorism for both operational and strategic goals.

A constituent part of Europol’s Operations Department, the ECTC works closely with other operational centres at Europol, such as the European Cybercrime Centre (EC3) and the European Migrant Smuggling Centre (EMSC).

The ECTC’s information-sharing operations strengthens Europol overall counter-terrorism capabilities. It equipped to assist Member States, and key partners such as Interpol and Eurojust, in the effective management of counter terrorism intelligence.

The ECTC has 81 staff members and 14 seconded national experts (January 2018).