PrintPDF
Ensuring the secure exchange of sensitive and restricted information

In an organisation like Europol, which facilitates and relies on the exchange of information, the secure and swift transmission of sensitive and restricted data is essential.

The platform enables the swift and user-friendly exchange of operational and strategic crime-related information among: 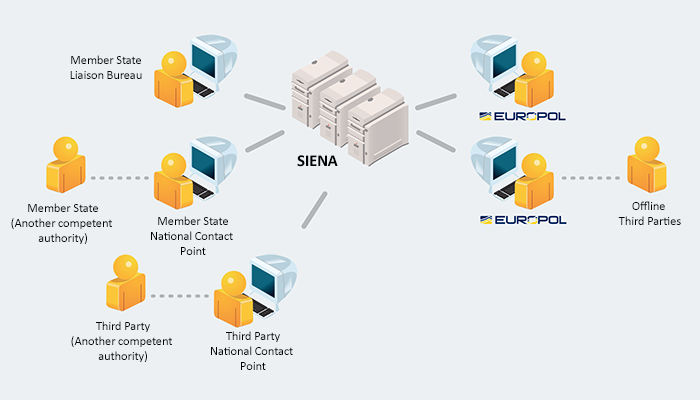 Europol’s Strategy 2020+ calls for the further roll-out and development of SIENA by advancing Europol’s information management architecture and rapidly embracing new methods and technologies as they become available.

SIENA is compliant with all the legal requirements for data protection and confidentiality.

SIENA is key to making Europol the EU information hub on crime. It brings Europol closer to the front line of law enforcement, particularly when it comes to promoting and enhancing the exchange of information on counter-terrorism.

Under a pilot programme agreed between Europol and the German Federal Criminal Police Office in 2015, SIENA is being rolled out to the central police offices in all federal states in Germany.

Future plans include rolling out the system to regional initiatives.

There are also plans to provide machine translations of SIENA messages into other EU languages.

Information exchange via SIENA in 2020: