EMPACT stands for the European Multidisciplinary Platform Against Criminal Threats. It introduces an integrated approach to EU internal security, involving measures that range from external border controls, police, customs and judicial cooperation to information management, innovation, training, prevention and the external dimension of internal security, as well as public-private partnerships where appropriate.

The initial, reduced, EU Policy Cycle for organised and serious international crime/EMPACT was implemented between 2012 and 2013. This was followed by two fully-fledged EU Policy Cycles between 2014-2017 and 2018-2021 . Through these different stages, EMPACT has evolved into an EU flagship instrument for multidisciplinary and multiagency operational cooperation to fight organised crime at an EU level. It calls for robust action to target the most pressing criminal threats facing the European Union.

EMPACT has a clear methodology for setting, implementing and evaluating priorities in the fight against organised and serious international crime. It aims to tackle the most important threats posed to the European Union in a coherent, methodological way by improving and strengthening cooperation between the relevant services of the Member States, EU institutions and EU agencies, as well as third-party countries and organisations, including the private sector where relevant.

In 2021, the Council of the European Union decided on the following:

EMPACT is a permanent and key EU instrument for structured multidisciplinary cooperation to fight organised and serious international crime driven by the Member States and supported by EU institutions, bodies and agencies in line with their respective mandates. EMPACT follows a four-year cycle and consists of four steps, namely:

The role of EU SOCTA

The first policy development step is based on the European Union Serious and Organised Crime Threat Assessment (EU SOCTA). The EU SOCTA, prepared by Europol, identifies a set of key threats based on in-depth analysis of the major crime threats facing the European Union. On the basis of these, the Council of the European Union defines the priorities for the fight against serious and organised crime. The SOCTA plays a key role in EMPACT.

In preparing the EU SOCTA 2021, Europol analysed trends and patterns in current crime data, but it also scanned the environment for other factors that can be expected to influence the commission of organised crime over the four years, and the ability of law enforcement to stop this. This exercise provides the basis for assessing future threats to EU internal security.

The analysis underpinning the development of priorities also supports the planning of operational actions.

The next step involves  policy setting and decision-making through the identification of a limited number of priorities by the Council. Further, a General Multi-Annual Strategic Plan (G-MASP) with Common Horizontal Strategic Goals (CHSGs) is developed to achieve a multidisciplinary, integrated and integral (covering preventive as well as repressive measures) approach to effectively address the prioritised threats.

The third step involves the development, implementation and monitoring of annual operational action plans (OAPs). The 15 OAPs contain operational actions to combat crime in the 10 areas corresponding to the European Union’s crime priorities for EMPACT 2022-2025. The OAPs address the prioritised threats and need to be aligned with the CHSGs as determined in the G-MASP. Additional targeted strategic goals may be added to the OAPs, tailored to the specific priority needs.

During the implementation of the operational actions in the OAPs, information exchange related to criminal investigations comes to Europol via its Secure Information Exchange Network Application (SIENA), for analysis. The intelligence derived from these investigations is processed by the Europol Analysis Projects in line with the handling codes. This feeds into the intelligence cycle and may trigger the review of priorities and strategic goals following the mid-term review of new, evolving and emerging threats.

The Standing Committee on Operational Cooperation on Internal Security (COSI) adopts the annual OAPs and coordinates and monitors their implementation. COSI also monitors and endeavours to ensure that adequate funding is provided to effectively support the actions agreed upon within EMPACT.

At the end of each EMPACT cycle, an independent evaluation will be conducted to assess the implementation of EMPACT and its outcomes, followed by an informed policy decision, and will serve as guidance for the next EMPACT cycle. 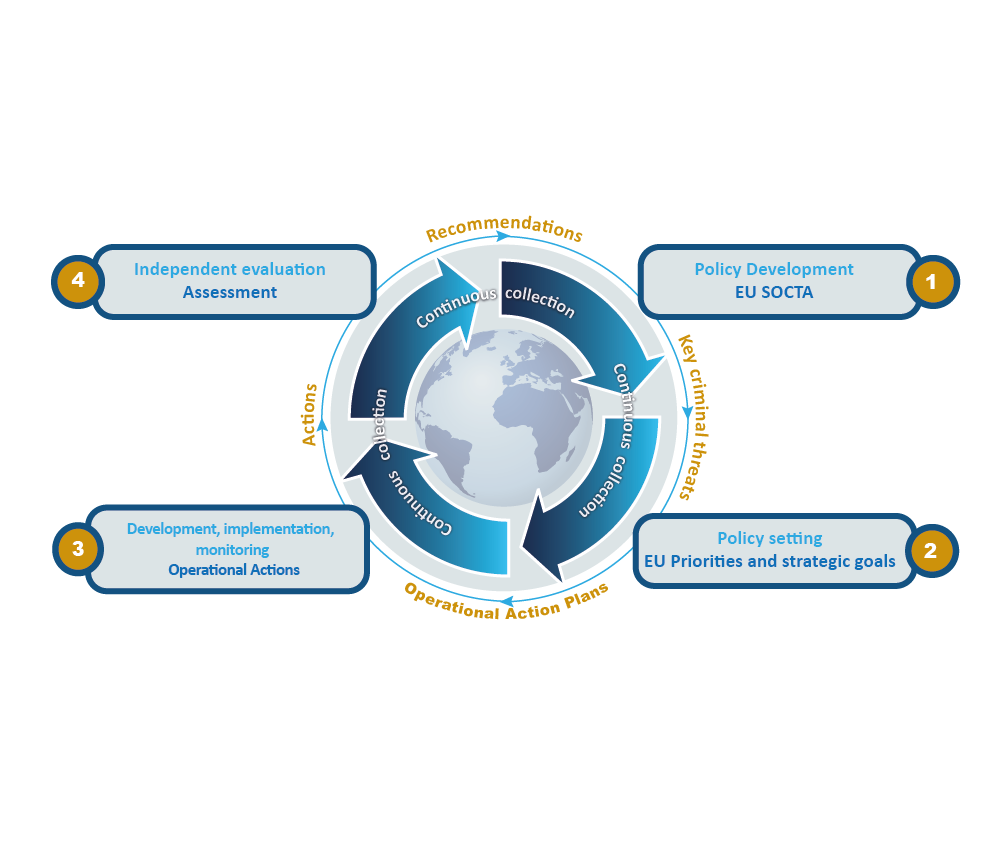 The operational and governance framework of EMPACT is further developed in the EMPACT Terms of Reference, as approved by COSI.

Successes partly or wholly attributable to the EMPACT cycle have already been seen in each of the priority crime areas, and there is every reason to expect that this trend will continue.