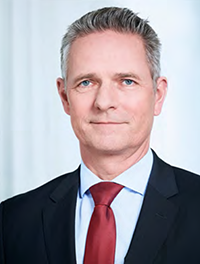 Jürgen Ebner was born in Germany in 1966. He joined the police in 1988, where he occupied various operational positions at the Federal Criminal Police and reached a post at the Cabinet of the President.

Between 2001 and 2006, Mr Ebner worked at Europol, starting as Seconded National Expert followed by three years as Head of Unit Directorate Support and reaching the post of Acting Assistant Director Corporate Governance.

Between 2006 and 2019, he served at the BKA, starting with five years as Head of Section, planning, strategy and future oriented analysis. In 2011 he became Deputy Head of the Personal Protection Division, responsible for commanding and implementing state visits to Germany, and as Deputy Commander for major events.

In 2016, he reached the rank of Head of Division Central Information Management, leading a large and diverse division (650 law enforcement officers, public servants and scientists) with a focus on Information Management, Business related development of national and international Police IT-systems, biometric systems in order to improve identification and identity management. He furthermore was responsible for the development of national and international search systems such as Schengen Information System, Interpol Search Systems and the establishment of the Passenger Information Unit. His responsibilities included developments such as the EU-regulations on SIS, interoperability and Eurodac.

Mr Ebner was appointed by the Council of the EU to his current post as Deputy Executive Director of Europol with specific responsibility for Governance matters, including as Europol’s Security Coordinator. He took up his functions in November 2019.