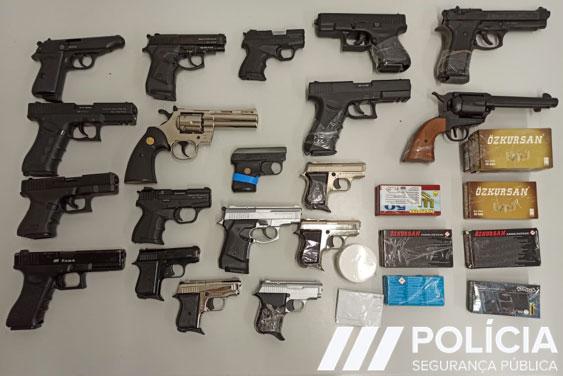 A total of 24 European countries[1] supported by EU institutions and agencies[2] including Europol, have come together to target alarm and signal weapons of Turkish origin illegally trafficked into the EU via Bulgaria and other countries. To tackle the increase in weapons illegally transformed and traded, the operation was setup and led by the Romanian Police (Politia Romana) within the framework of the European Multidisciplinary Platform Against Criminal Threats (EMPACT). Supported by Europol, authorities collected data and conducted intelligence analysis of the buyers and sellers of firearms earlier this year to enable series of investigations and activities on a national level.

Between 2 and 11 November the yearlong operation was concluded by joint action days. During the span of the action days, police officers from Albania, Greece, Portugal and Romania carried out 81 house searches.

These investigations led to the following arrests and seizures:

Previous results: prior to the action days, all participating countries conducted various activities and investigations that led to the additional seizure of 1 585 firearms.

The action leader of the EMPACT Firearms activity from the Romanian Police coordinated the operation with the support of Bulgaria, Spain and Europol. The framework for the joint action weeks consisted of an operational upstream work performed by gathering intelligence, databases crosschecking and operational analysis of buyers in the EU of weapons from Bulgarian firearms dealers. Europol provided further support during the course of the action days with the exchange of information and real time communication among the participating countries.

In recent years, alarm and signal weapons have become extremely popular among criminals and feature in considerable figures in firearm trafficking and seizure cases. This is due to the fact that they can be easily converted into lethal weapons and are cheaper to procure.

In 2010 the European Union set up a four-year Policy Cycleto ensure greater continuity in the fight against serious international and organised crime. In 2017 the Council of the EU decided to continue the EU Policy Cycle for the period. It aims to tackle the most significant threats posed by organised and serious international crime to the EU. This is achieved by improving and strengthening cooperation between the relevant services of EU Member States, institutions and agencies, as well as non-EU countries and organisations, including the private sector where relevant. Illicit firearms trafficking is one of the priorities for the Policy Cycle.
Crime areas
Illicit firearms trafficking
Target groups
General Public
Law Enforcement
Academia
Professor
Students
Researcher
Press/Journalists
Other
Organisations
Eurojust
European Commission
Support & Services
Operational coordination
Operational support
Information exchange
Analysis
Operational