Europol, together with OLAF, has supported an intensive coordinated international operation carried out at major seaports and airports and at the land borders of Belgium, France, Germany, Greece, Hungary, Ireland, Italy, Lithuania, Poland, Romania, Slovak Republic, Slovenia, Sweden, Spain, United Kingdom and the action leader Netherlands. During the 10 days of the Operation Silver Axe II, competent authorities from these 16 EU countries were involved in inspecting over 940 shipments of Plant Protection Products. 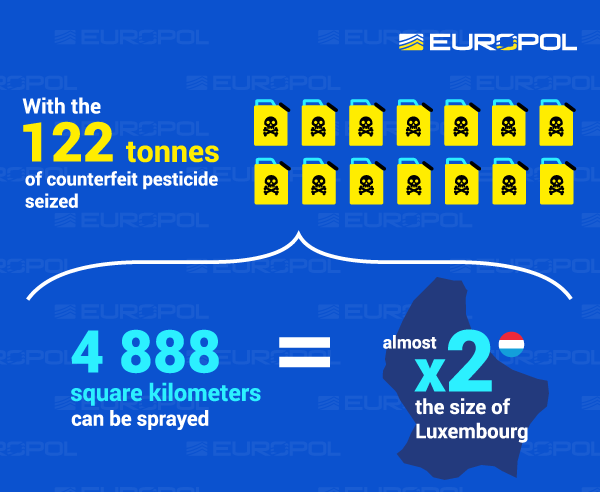 The operation is targeting the emerging menace of illicit pesticides, being focused on the their sale and placing on the market (imports), including infringements of intellectual property rights such as trademarks, patents and copyright, as well as the substandard pesticides. As a result, the various law enforcement agencies in the participating countries discovered almost 122 tons of illegal or counterfeit pesticides, detecting 48 cases1 which led also to the initiation of further investigations by the authorities.

"This operation demonstrates once again that working with coordinated efforts is the key element for successful results against criminal businesses who compromise the health and safety of our citizens in their rush for easily gained money. Europol will continue to support the cooperation of law enforcement agencies with the plant protection industry. Our contributions based on the intelligence exchange and data processing will undoubtedly facilitate other operational successes of this kind in the future" said Wil van Gemert, Europol's Deputy Executive Director of Operations.

Operation Silver Axe has reached to its second phase and is becoming a recurring operation supported by Europol’s Intellectual Property Crime Coordinated Coalition (IPC3). During the operation, Europol experts exchanged and analysed data received from the participating countries, liaised with rights holders from the private sector and provided on the spot support. OLAF provided Europol with information on suspicious containers of pesticides transhipped in the European Union.

Cooperation with private industry and other European and international bodies was crucial to the success of the action. CropLife International, the European Crop Protection Association ECPA and the European Crop Care Association ECCA, representing the plant protection industry, and EC-DG SANTE, OLAF, Interpol and FAO from the public sector, participated in the preparation phase as well as during the operation. Private sector played an important role, especially the Polish crop protection association – PSOR.

"Pesticides like all high value goods are targeted by counterfeiters. But unlike fake shoes or t-shirts, counterfeit and illegal pesticides do present a very real risk to people's health and the environment. There has to be a zero tolerance policy for such criminal activities. Silver Axe has again highlighted the extent of the problem and the need to keep working together to fight it" said Graeme Taylor, ECPA’s Director of Public Affairs.

"The success of this operation is not only measured in the seizure of 122 tons of illegal pesticides: at least as important is the cooperation between the enforcement agencies of a growing number of Member States. The coordinated action will lead to an increased efficiency in the fight against this form of organised crime, which poses a threat to human health, crops, and the environment" said Hans Mattaar, Technical Director of ECCA.