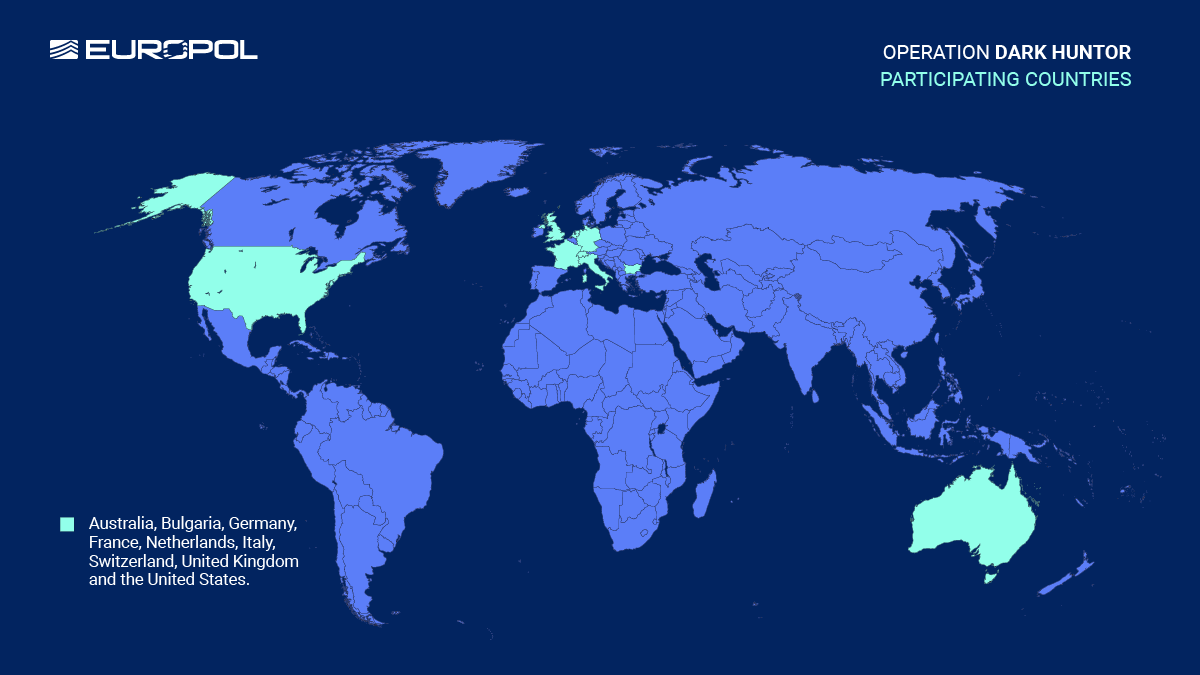 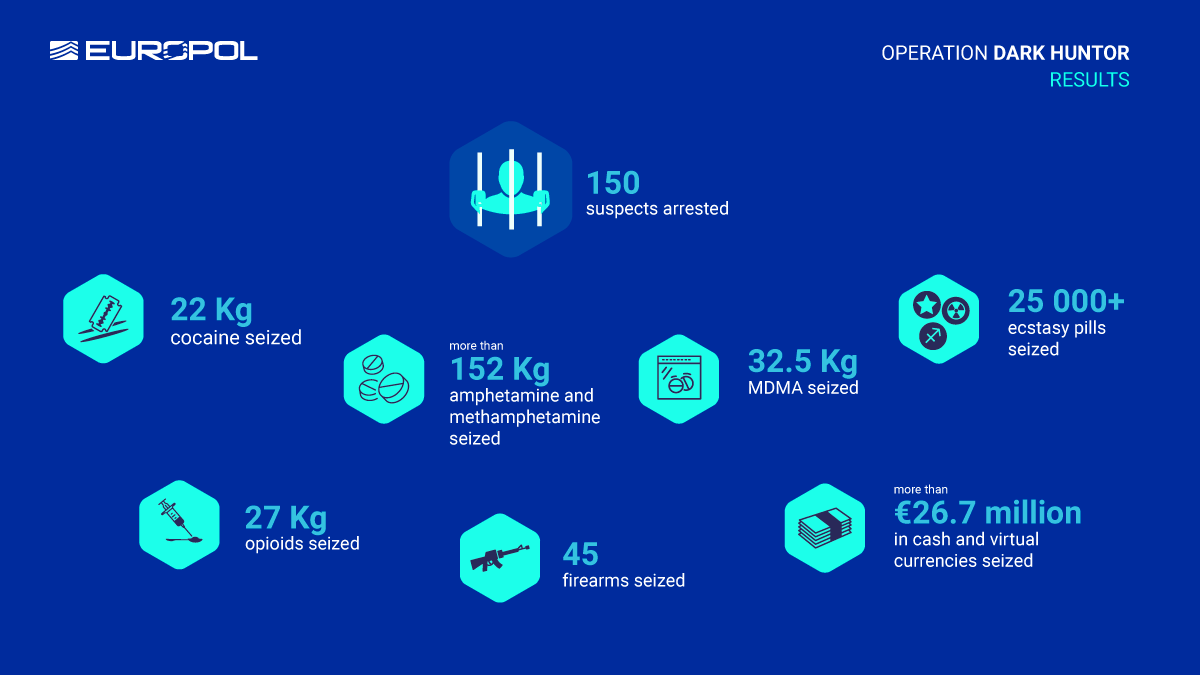 Police forces across the world have arrested 150 alleged suspects involved in buying or selling illicit goods on the dark web as part of a coordinated international operation involving nine countries.

More than €26.7 million (USD 31 million) in cash and virtual currencies have been seized in this operation, as well as 234 kg of drugs and 45 firearms. The seized drugs include 152 kg of amphetamine, 27 kg of opioids and over 25 000 ecstasy pills.

This operation, known as Dark HunTOR, was composed of a series of separate but complementary actions in Australia, Bulgaria, France, Germany, Italy, the Netherlands, Switzerland, the United Kingdom and the United States, with coordination efforts led by Europol and Eurojust.

Operation Dark HunTOR stems from the takedown earlier this year of DarkMarket, the world’s then-largest illegal marketplace on the dark web. At the time, German authorities arrested the marketplace’s alleged operator and seized the criminal infrastructure, providing investigators across the world with a trove of evidence. Europol’s European Cybercrime Centre (EC3) has since been compiling intelligence packages to identify the key targets.

As a result, 150 vendors and buyers who engaged in tens of thousands of sales of illicit goods were arrested across Europe and the United States. A number of these suspects were considered as High-Value Targets by Europol.

These arrests took place in the United States (65), Germany (47), the United Kingdom (24), Italy (4), the Netherlands (4), France (3), Switzerland (2) and Bulgaria (1). A number of investigations are still ongoing to identify additional individuals behind dark web accounts.

In the framework of this operation the Italian authorities also shut down the DeepSea and Berlusconi dark web marketplaces, which together boasted over 100 000 announcements of illegal products. Four administrators were arrested, and €3.6 million in cryptocurrencies seized.

Europol’s EC3 facilitated the information exchange in the framework of the Joint Cybercrime Action Taskforce (J-CAT) hosted at Europol’s headquarters in The Hague, the Netherlands.

Commenting on Operation Dark HunTOR, Europol’s Deputy Executive Director of Operations, Jean-Philippe Lecouffe, said: “The point of operations such as the one today is to put criminals operating on the dark web on notice: the law enforcement community has the means and global partnerships to unmask them and hold them accountable for their illegal activities, even in areas of the dark web.”

Thinking of buying illegal goods anonymously on the dark web?

Think again, as the dark web is no longer as dark as some criminals would like. Law enforcement have become accustomed to working in this space and can deploy a wide array of different techniques to identify buyers and sellers of illegal goods.

Buying on the dark web comes with risks:

The following authorities took part in this operation:

Operation Dark HunTOR was carried out in the framework of the European Multidisciplinary Platform Against Criminal Threats (EMPACT).

In 2017 the Council of the EU decided to continue the EU Policy Cycle for the 2018 - 2021 period. It aims to tackle the most significant threats posed by organised and serious international crime to the EU. This is achieved by improving and strengthening cooperation between the relevant services of EU Member States, institutions and agencies, as well as non-EU countries and organisations, including the private sector where relevant. Cybercrime is one of the priorities for the Policy Cycle. From 2022, the mechanism becomes permanent under the name EMPACT 2022+.
Crime areas
Cybercrime
Target groups
General Public
Law Enforcement
Academia
Professor
Students
Researcher
Press/Journalists
Other
Support & Services
Operational coordination
Operational support
Information exchange