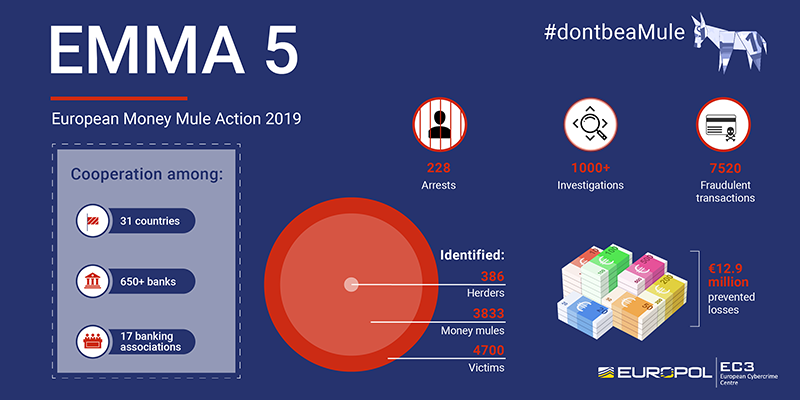 Law enforcement authorities from 31 countries, supported by Europol, Eurojust and the European Banking Federation (EBF), have stepped up their efforts to crack down on money mule schemes that rope in victims often unaware that the money they are sending is part of an elaborated money laundering scheme.

The fifth European Money Mule Action (EMMA 5) took place between September – November 2019, resulting in the identification of 3833 money mules alongside 386 money mule recruiters, of which 228 were arrested. 1025 criminal investigations were open, many of them are still ongoing. More than 650 banks, 17 bank associations and other financial institutions helped to report 7520 fraudulent money mule transactions, preventing a total loss of €12.9 million.

Europol and Eurojust organised various operational and coordination meetings in The Hague to discuss the unique approach of each Member State to tackle money muling in their respective country. During the three-month action, Europol supported the operations by assisting the national authorities with cross-checks against Europol’s databases and intelligence gathering for further analysis, while Eurojust contributed to the swift forwarding and facilitation of the execution of European Investigation Orders. 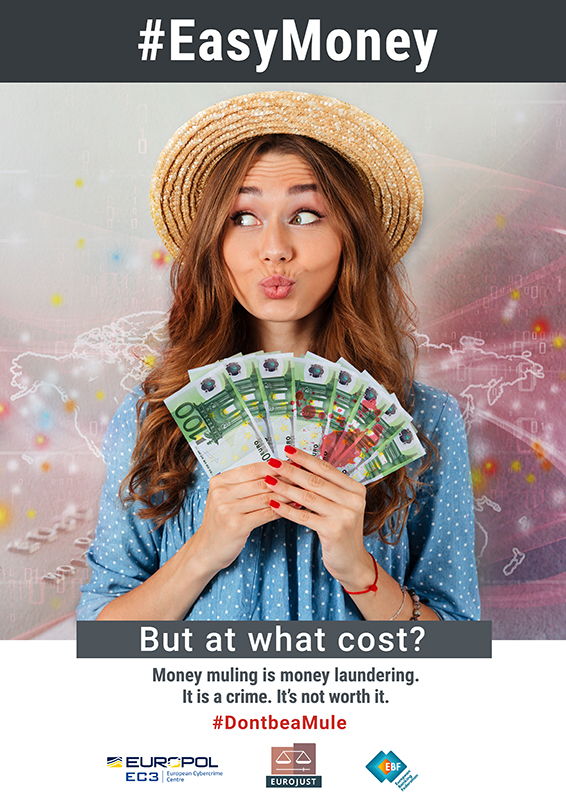 Money mules, unlike their drug-trade counterparts, are not shuffling illicit goods over a physical border. Instead, they take part – often unknowingly - in money laundering activities by receiving and transferring illegally obtained money between bank accounts and/or countries.

Recruiters of money mules are coming up with ingenious ways to lure in their candidates. This year, cases involving romance scams were reported on the rise, with criminals increasingly recruiting money mules on online dating sites, grooming their victims over time to convince them to open bank accounts under the guise of sending or receiving funds. Criminals are also more and more turning to social media to recruit new accomplices through get-rich-quick online advertisements. This technique is particularly popular when it comes to targeting students and young adults.

Even if money mules act unwittingly, they are committing a crime. Law enforcement will turn first to whoever’s name features on the bank account, and the legal consequences can be severe. Depending on the country’s legal framework, mules may face lengthy imprisonments and acquire a criminal record that could seriously affect the rest of their lives, such as never being able to secure a mortgage or open a bank account.

To raise awareness of this type of fraud, the money muling awareness campaign #DontbeaMule kicks off today across Europe. With awareness-raising material, available for download in 25 languages, the campaign will inform the public about how these criminals operate, how they can protect themselves and what to do if they become a victim.

For the next week, international partners from law enforcement and judicial authorities, together with financial institutions, will be supporting the campaign at national level.

Do you think you might be used as a mule? Act now before it is too late: stop transferring money and notify your bank and your national police immediately.