The Spanish Civil Guard’s Environment Protection Service (Guardia Civil - SEPRONA), together with the Portuguese Republican National Guard (Guarda Nacional Republicana) and the Moroccan Royal Guard (الحرس الملكي المغربي‎) have arrested with the support of Europol 28 bird traffickers in a crackdown on an illegal wildlife smuggling business netting €1 million per year. 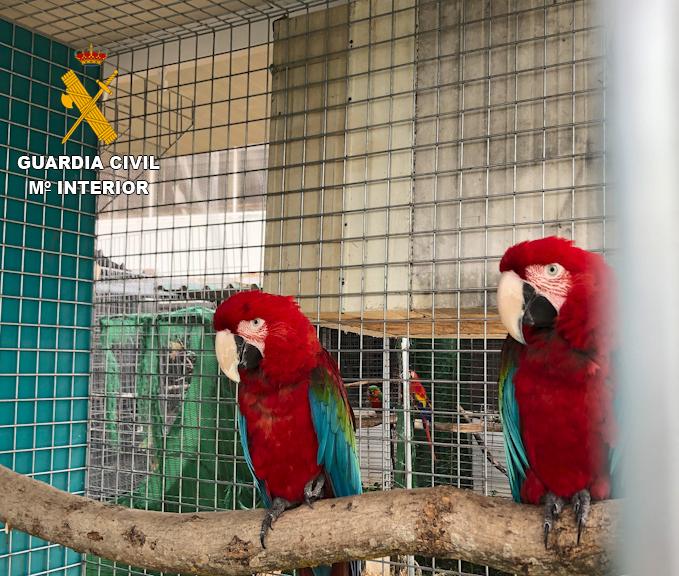 280 exotic birds were recovered, valued at over one million euros, among which featured macaws, parrots and cockatoos, all of which are endangered species protected by CITES (the Convention on International Trade in Endangered Species of Wild Fauna and Flora). These birds were destined to be sold to North African countries – Morocco in particular, where the demand for them is high.

Codenamed ‘ORATIX’, this operation took place earlier this year in February and March in the Spanish cities of Malaga, Murcia, Granada, Alicante and Asturias.

The investigation initiated in 2019 uncovered how this criminal group would sell these endangered species to North African buyers using forged documents. The criminals would then arrange for the birds to be smuggled out of Spain hidden in buses heading to the African continent. The traffickers were supported by a Moroccan citizen who worked in a travel agency and arranged the logistics. They also developed their illegal business online, where they would sell birds but never deliver them, despite the buyers having paid for them. In addition, over 400 marijuana plants were discovered during the house searches, indicating that this group of traffickers was involved in a variety of criminal activities.

Europol supported this investigation from its on-set, providing operational and strategic analysis and piecing together evidence to identify the route used by the smugglers. One of its experts was also deployed on-the-spot in Spain to assist the law enforcement authorities with the cross-checking of information against Europol’s databases.

A black market in parrots

It is believed that parrot smuggling worldwide is on the rise. Some species can reach several hundreds of thousands of euros on the black market. The demand driving this illicit trade comes from collectors and breeders, but also citizens who want them as pets. However, this desire to own such exotic birds is killing them off.

A number of parrot species are threatened with extinction due in part to pressures from collecting for the pet trade. There is however legal protection in place. All but two parrot species are protected under CITES, as a result of which their commercial trade is either prohibited or strictly regulated with export permits.

With dedicated staff working on environmental crime, Europol supports EU Member States in their investigations to stop criminals damaging our ecosystems beyond repair.