Today, law enforcement authorities from 26 countries and Europol announce the results of the European Money Mule Action ‘EMMA 6’, a worldwide operation against money mule schemes. Between September and November 2020, EMMA 6 was carried out for the sixth consecutive year with the support of the European Banking Federation (EBF), FinTech FinCrime Exchange, INTERPOL and Western Union. As a result, 4 031 money mules were identified alongside 227 money mule recruiters, and 422 individuals were arrested worldwide.

During the span of the operation, 1 529 criminal investigations were initiated. With the support of the private sector including more than 500 banks and financial institutions, 4 942 fraudulent money mule transactions were identified, preventing a total loss estimated at €33.5 million.

Don’t become a link in the money laundering chain

Money mules are individuals who, often unwittingly, have been recruited by criminal organisations as money laundering agents to hide the origin of ill-gotten money. Unaware that they are engaging in criminal activities, and tricked by the promise of easy money, mules transfer stolen funds between accounts, often in different countries, on behalf of others. In exchange, they receive a commission for their services.

While mules are recruited via numerous routes such as direct contact or through email, criminals are more and more turning to social media to recruit new accomplices, through the advertisement of fake jobs offers (e.g. ‘money transfer agents’), online pop-up ads and instant messaging applications. Although some COVID-19 related cases have been reported, payment process compromise and romance scams continue to be the most recurrent schemes. The use of cryptocurrencies by money mules is also on the rise.

This week, Europol and EU law enforcement authorities together with international partners and financial institutions will launch the #DontBeaMule campaign to raise awareness among the public on the risks of money mule schemes.

The campaign, promoted nationally by competent authorities, will aim to inform the public about how criminals operate, how they can protect themselves and what to do if they become involved.

What do you risk as a money mule?

What can you do?

If you think you might be used as a mule, act now before it is too late: stop transferring money and notify your bank and your national police immediately. 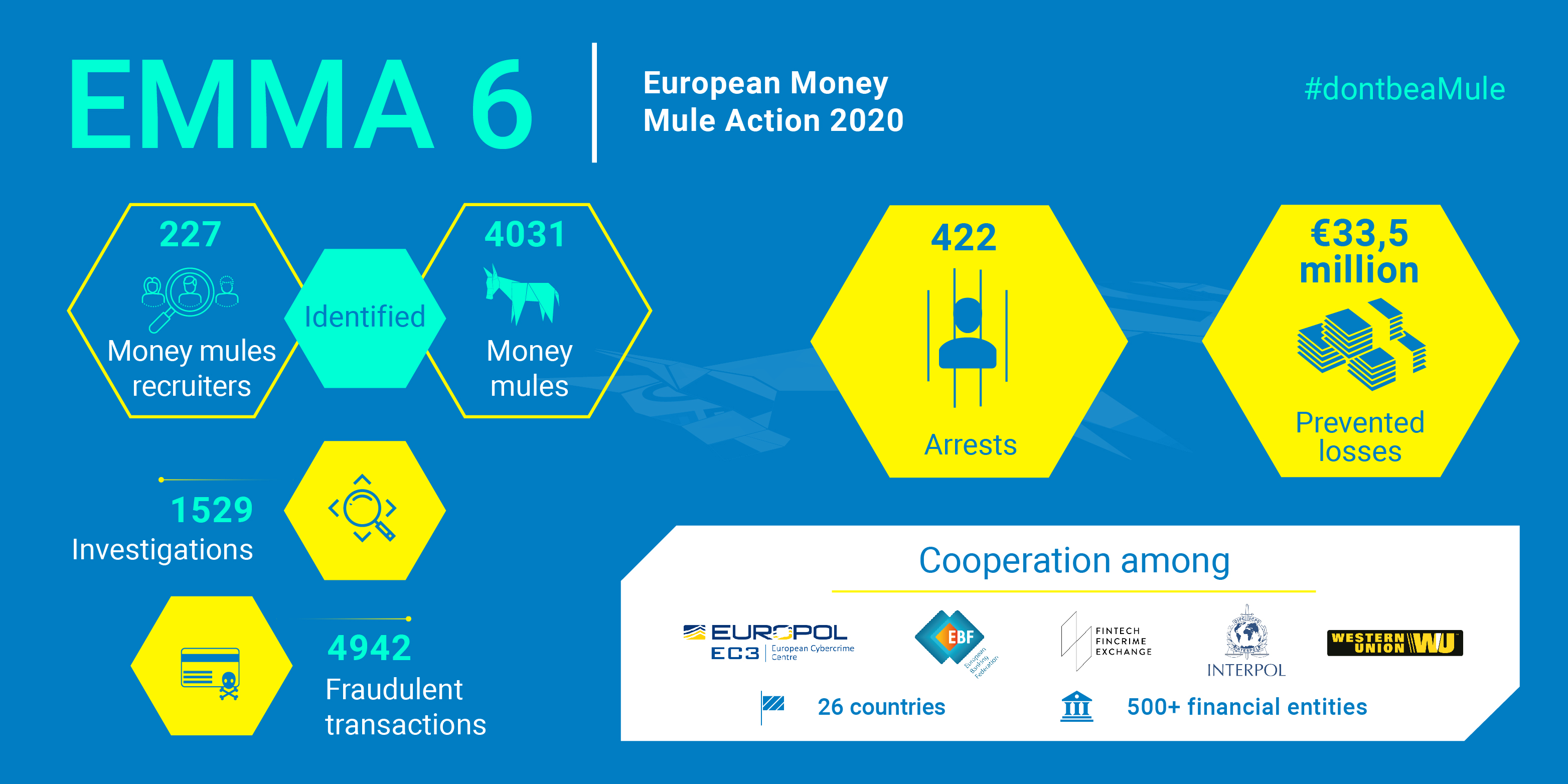 During this yearlong operation, Europol supported the coordination and preparation of operational meetings, delivered analysis and facilitated the exchange of information between law enforcement authorities and private partners. Furthermore, Europol coordinated the awareness campaign with the participating countries.

Headquartered in The Hague, the Netherlands, Europol supports the 27 EU Member States in their fight against terrorism, cybercrime and other serious and organised forms of crime. We also work with many non-EU partner states and international organisations. From its various threat assessments to its intelligence-gathering and operational activities, Europol has the tools and resources it needs to do its part in making Europe safer.

In 2010 the European Union set up a four-year Policy Cycle to ensure greater continuity in the fight against serious international and organised crime. In 2017 the Council of the EU decided to continue the EU Policy Cycle for the period. It aims to tackle the most significant threats posed by organised and serious international crime to the EU. This is achieved by improving and strengthening cooperation between the relevant services of EU Member States, institutions and agencies, as well as non-EU countries and organisations, including the private sector where relevant.Cybercrime is one of the priorities for the Policy Cycle.
Crime areas
Cybercrime
Forgery of money and means of payment
Money Muling
Economic Crime
Money Laundering
Target groups
General Public
Law Enforcement
Academia
Professor
Students
Researcher
Press/Journalists
Other