All you need to know about migrant smuggling in the EU

Despite the significant decrease in the number of irregular migrants arriving in Europe, migrant smuggling remains a profitable and widespread criminal activity for organised crime in the European Union (EU). Europol’s two-year activity report from the European Migrant Smuggling Centre (EMSC) provides a detailed overview of the developments and trends in migrant smuggling. The report was published to mark the Annual Conference of Heads of Migrant Smuggling Units, hosted by Europol in The Hague.
Two years of EMSC. Download the report.

Since the migration crisis in 2015 the migrant smuggling business has established itself as a large, lucrative criminal market and migrant smuggling continues to represent a highly-profitable business in which criminal syndicates enjoy low risk of detection. The business model of criminals involved in this crime is continuously evolving and responding to the dynamics and the needs of the migratory flows. Many factors, including policy developments, law enforcement activities, as well as budget and travel preferences of irregular migrants, have an impact on the migration routes and modi operandi used by migrant smugglers. Criminals quickly adapt to changes and show great versatility in the means of transport and technologies they use. They are becoming more and more organised, establishing sophisticated professional networks, operating transnationally from source towards destination countries. 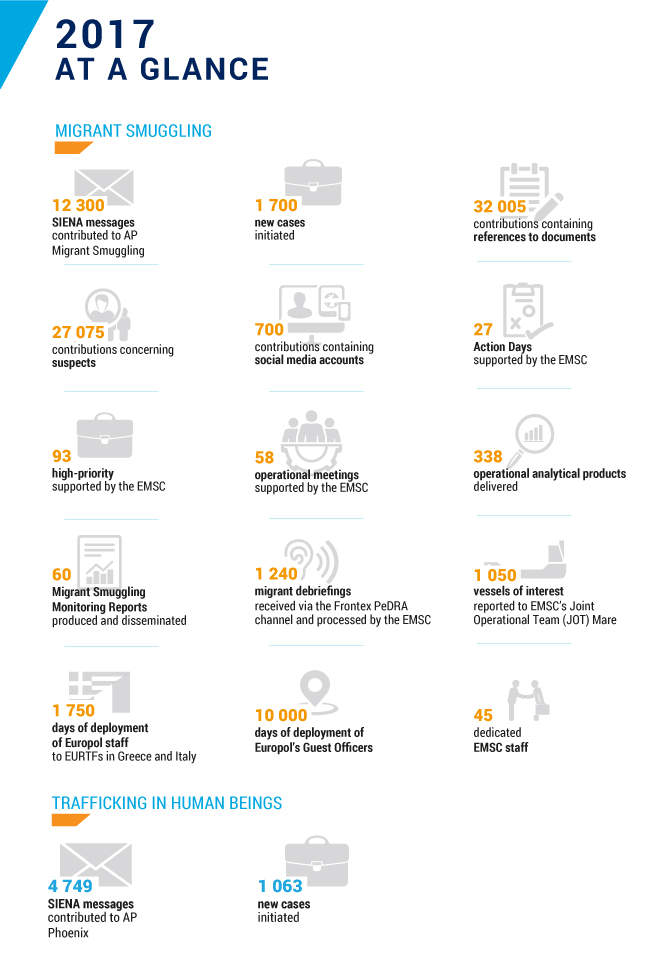 The head of the European Migrant Smuggling Centre, Robert Crepinko said: "Migrant smuggling to and within the EU is likely to remain a key criminal threat. In order to fight this crime more effectively, it is important to anticipate the developments of new modi operandi and shifts in the criminal market. Among others, use of advanced technology, especially related to document fraud, increased use of genuine documents by lookalikes, and abuse of visa-free travel, are expected to significantly impact the migrant smuggling landscape in the future."

Main areas of focus of the EMSC report

Europol’s EMSC was established in early 2016 following a period of highly dynamic irregular migration, with vulnerable migrants travelling largely unrestricted in sizeable groups across the Mediterranean Sea, external land borders and beyond into the EU. Europol established that many migrants had their journey facilitated by criminal organisations. The core task of the EMSC is supporting cross-border investigations to disrupt and prosecute organised crime groups.