Board Meeting of the Joint Cybercrime Action Taskforce 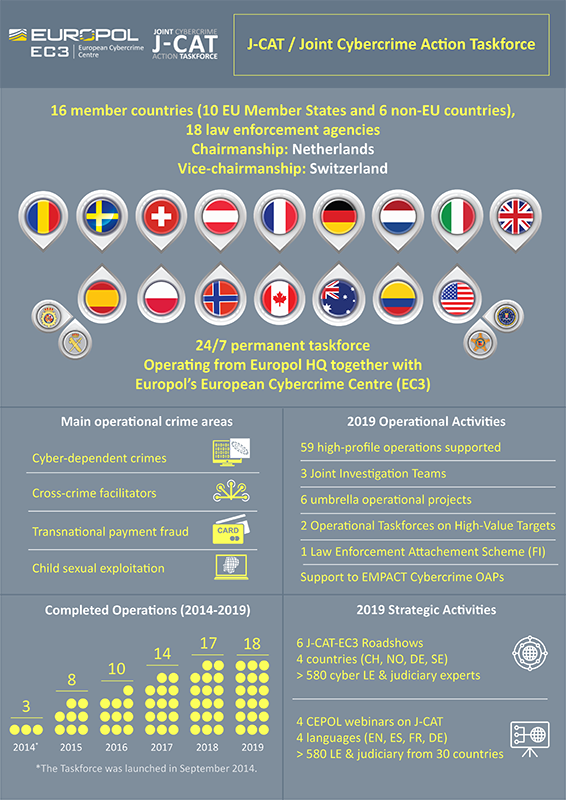 Today, the Joint Cybercrime Action Taskforce (J-CAT), an international initiative to tackle the most pressing threats of cybercrime, met within the framework of its Board in Rome, Italy, to discuss operational and strategic matters for the year ahead.

The objective of this Taskforce, launched in 2014, is to drive intelligence-led, coordinated actions against key cybercrime threats and targets by facilitating the joint identification, preparation and smooth running of cross border cybercrime investigations by its partners.

Romania has become the latest country to join the J-CAT whose membership now spans 16 countries:

All these officers work from the same office within Europol’s European Cybercrime Centre (EC3) to facilitate the smooth and swift exchange of information between the involved countries.
During this meeting in Rome, the Dutch Chairmanship of the J-CAT was extended, while the new Vice-Chairmanship – Switzerland, was elected, replacing the US FBI in this position.

The J-CAT supported 59 high-profile cybercrime cases in 2019, with notable successes including:

In a bid to boost awareness and collaboration with national, regional and local cyber police units from current J-CAT member countries, a number of roadshows were organised in 2019 in Switzerland, Norway, Germany and Sweden. These roadshows followed the two Dutch ones organised in Dec 2018.

Over 580 cyber law enforcement and judiciary practitioners took part in these roadshows which included presentations on the tools and services provided by Europol’s European Cybercrime in support of cyber cases, as well as the type of support offered by the J-CAT cyber liaison officers.

This programme of roadshows was supplemented by 4 CEPOL webinars, delivered in different languages by the J-CAT members themselves to reach out to cyber investigators at the national and local level in their own language. A further 580 participants from over 30 countries joined these webinars.

Such awareness raising activities have already resulted in concrete operational outcomes, such as an increase in the operational contributions as well as the increased use of the tools provided by Europol.