The report will be launched on 26 November in Brussels 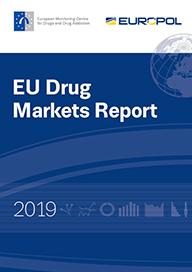 Drug trafficking is a highly profitable commercial activity and remains a core business for organised crime groups across Europe today. Understanding the reality of the European drug market requires a holistic approach, following the supply chain from production and trafficking to distribution and sales.

Taking such an approach, two EU agencies — the European Monitoring Centre for Drugs and Drug Addiction (EMCDDA) and Europol — have joined forces to provide their third in-depth overview of the European illicit drug market in the 2019 EU Drug Markets Report.

To be launched in Brussels on 26 November, this strategic and action-oriented analysis combines data from the EMCDDA’s drug monitoring system with Europol’s operational intelligence on organised crime.

Press conference will be held on 26 November 2019 in Brussels RSVP and embargoed copies: press@emcdda.europa.eu

The EU Drug Markets Report is published every three years.