These are some of the main findings of the European Union Serious and Organised Crime Threat Assessment 2017 (SOCTA), which Europol releases today. 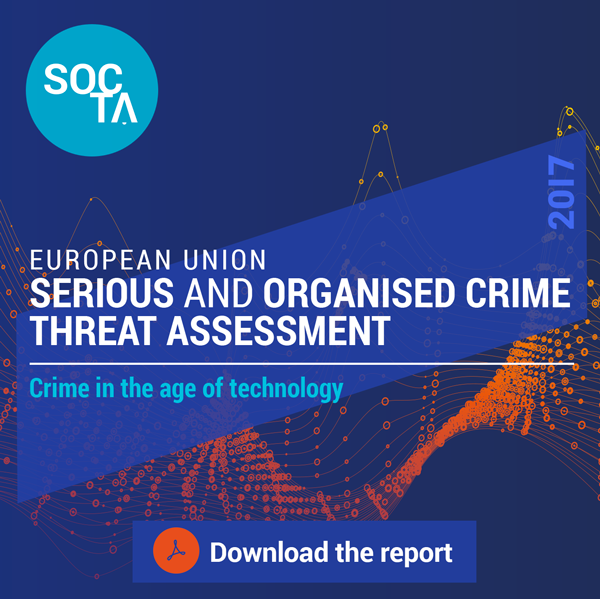 Europol’s Director Rob Wainwright: “The SOCTA 2017, Europol’s flagship product, represents the outcome of the largest data collection on serious and organised crime ever undertaken in the EU. Europol has been able to use its singular intelligence capability as the European information hub for criminal intelligence to analyse and identify the key crime threats facing the EU. These include cybercrime, illicit drugs, migrant smuggling, organised property crime, and the trafficking in human beings.”

Julian King, European Commissioner for the Security Union: “The SOCTA 2017 delivers a set of recommendations based on an in-depth analysis of the major crime threats facing the EU and is providing information to Europe’s law enforcement community and decision-makers. It shows that Europol’s position is at the heart of the European security architecture."

Andrew Seychell, Maltese Council Presidency: “As chair of the Standing Committee on Operational Cooperation on Internal Security (COSI), I am very pleased with the detailed and comprehensive intelligence picture presented in the SOCTA. Based on these findings Member States will discuss in the following weeks how to take forward cooperation in the fight against serious and organised crime in the EU. I am confident that the EU Policy Cycle 2018-2021 will provide a highly relevant contribution to the intelligence-led fight against serious and organised crime.”

Crime in the age of technology

In the SOCTA 2017, Europol highlights in particular the role of technology. Criminals have always been adept at exploiting technology. However, the rate of technological innovation and the ability of organised criminals to adapt these technologies have been increasing steadily over recent years. Developments such as the emergence of the online trade in illicit goods and services are set to result in significant shifts in criminal markets and confront law enforcement authorities with new challenges.

Data as a key commodity

Data has become a key commodity for criminals: increasing internet connectivity by citizens, businesses and the public sector, along with the exponentially growing number of connected devices and sensors as part of the Internet of Things will create new opportunities for criminals.

In many ways the profit-driven nature of organised crime is qualitatively different to terrorism. A nexus between the two exists, however, and may be expanding. Although the pursuit of criminal activities in support of terrorist activities is not a new phenomenon, the involvement of terrorist suspects with extensive criminal backgrounds and access to the resources and tools of organised crime networks in terrorism is a notable trend.

Europol’s SOCTA serves as the cornerstone of the EU Policy Cycle1 for organised and serious international crime and it is the product of close cooperation between Europol, the law enforcement authorities of the Member States, EU agencies and third parties such as international organisations and countries outside the EU with operational or strategic agreements with Europol. The SOCTA analyses and describes criminal markets and crime areas in the EU and gives recommendations for the EU Policy Cycle.

Read the comment by the academic advisors on the SOCTA 2017 here.

--
1 The EU Policy Cycle ensures effective cooperation between national law enforcement agencies, EU Institutions, EU Agencies and other relevant partners in the fight against serious and organised crime. The Standing Committee on operational cooperation on internal security (COSI) will use the recommendations of the SOCTA to define the EU crime priorities for the coming four years that will be adopted by the Council of Justice and Home Affairs Ministers. The 2017 SOCTA is the second edition of the SOCTA following its inaugural edition released in 2013.