112 types of illicit substances were seized, including 4 million doses of anabolic steroids, hormones, sexual enhancers and other substances, worth EUR 650 000 in the illegal market.

Europol has supported the Spanish Guardia Civil in an operation targeting an organised crime group involved in the large-scale trafficking of illicit doping substances. As a result, the criminal group was totally dismantled, and large amounts of illegal medicines and various substances were seized, most of them related to sports doping.

During the investigation, which took place in four different phases, 41 individuals were arrested in various Spanish regions, and 45 searches carried out at homes, stores and gyms across Spain. Among the arrestees were some elite athletes and international bodybuilding and fitness champions. In addition, investigators seized more than EUR 200 000 in cash, five (5) luxury vehicles, small quantities of narcotic substances (speed, hashish, marijuana and cocaine) and various weapons.

Europol assisted the investigations on the spot by deploying eight specialists to various cities in Spain during different phases of the investigation. This allowed for real-time exchange of information and cross-checks against Europol’s databases, as well as extractions of data from phones and data storage devices.

The investigation began in early 2017, after a sports centre in the Balearic Islands (Spain) was detected dispensing these substances without any medical or therapeutic checks. Investigators identified the person responsible for this illegal activity, who imported the illicit substances from Portugal. In addition, investigators identified several cells of the organisation across various Spanish provinces also involved in the illegal commercialisation of these products. 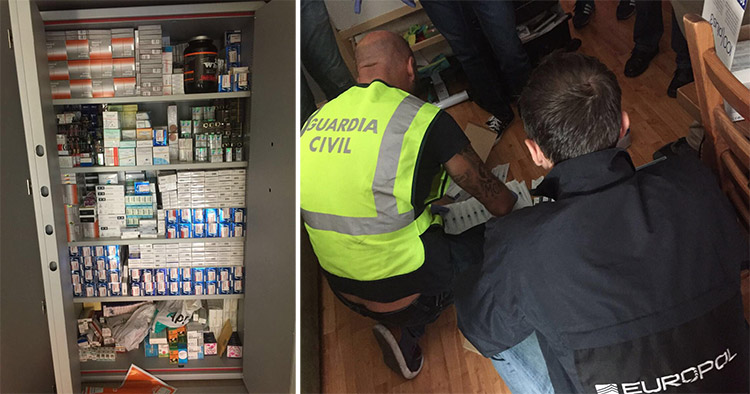 The modus operandi of the criminal group consisted of shipping the illegal doping substances - mainly anabolic steroids, hormones and other medicines - through courier companies, from countries like Bulgaria, Greece, Hungary, Latvia, Poland, Portugal, and the United States, to Spain. To ensure greater security for the shipments the gang used false identities and commercial structures, sometimes counting on the complicity of the transport companies’ employees. The criminal organisation sent large amounts of money hidden in postal packages to pay the international suppliers. Around  EUR 80 000 in cash were found hidden in printer cartridges in two packages destined for Greece, one them seized at Barcelona Airport (Spain) and the other in Cologne (Germany).

Investigations revealed that the criminal network may have made more than 4400 shipments of parcels weighing approximately 3.1 tonnes in total between 2016 and 2017. It is estimated that the gang could have earned EUR 2 million in illegal profits during this period.