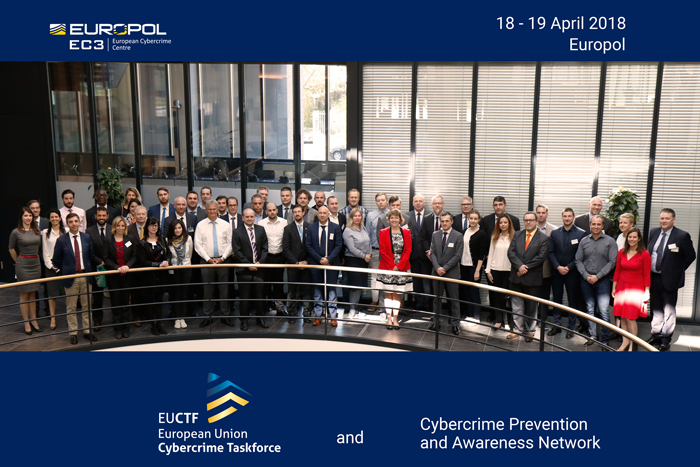 EU Member States, Europol Third Parties and EU Agencies join forces to strengthen the current cooperation model in the area of prevention and awareness as a way to contribute to the reduction of cybercrime.

Under the coordination of Europol’s European Cybercrime Centre (EC3), law enforcement representatives from 29 countries1 gathered with delegates from the EU Agency for Network and Information Security (ENISA), the EU Agency for Law Enforcement Training (CEPOL) and the EU Crime Prevention Network (EUCPN) in the fourth Cybercrime Prevention and Awareness Forum to assess the status and further implementation of the current EU communication strategy model. Initiated in 2015, the model aims to align the cybercrime prevention and awareness efforts among the EU Member States and to increase the effectiveness of the educational materials produced.

Initiatives such as No More Ransom, Stop Child Abuse – Trace an Object, Say No to child sexual coercion and extortion and the European Money Mule Action, among others, were presented as best practices of what can be achieved through optimization of human and financial resources, both at a national and an EU level.

The EC3 organises the Cybercrime prevention Forum with the aim to facilitate the cohesion of activities and campaigns, the sharing of existing materials, the development of new ideas and the exchange of best practices. Ultimately, its purpose is to enable a pan-European dialogue among all law enforcement entities in the area of prevention and awareness, thus strengthening the EU’s fight against cybercrime.

‘A large number of the attacks reported to the police are neither sophisticated nor advanced. Many of them work because of a lack of digital hygiene, a lack of security by design and a lack of user awareness,’ said Steven Wilson, Head of Europol’s EC3. ‘A crime prevented through education and awareness could help police forces to save valuable time and resources, which they can use instead in investigating the most serious activities happening online.’

For the first time since its establishment, members of the EU Cybercrime Taskforce (EUCTF) joined the Forum’s annual event. The EUCTF, an inter-agency group comprised of the heads of Cybercrime Units, Europol, the European Commission and Eurojust, gathers throughout the year to discuss the strategic and operational issues related to cybercrime investigations and prosecutions within the EU and beyond.

As a result, the joint discussions held at the Forum helped to generate specific recommendations on how to improve the current cooperation model and how to strengthen communication channels for continuous and fast exchange of information. Cybercrime threats requiring the most urgent attention have been identified, setting the basis for the design of joint campaigns to be developed from 2018 onwards.

Francoise-Xavier Masson, EUCTF Chair and Head of the French National Cybercrime Unit, said: The broad participation to this joint meeting demonstrates the EUCTF’s willingness to support EC3 activities. Moreover, our participation illustrates the continuous commitment of the Task Force towards prevention and awareness, which together form one of the core aims of the EUCTF mandate. In fact, it is clear across all the members of the EUCTF that, next to traditional investigation and intelligence work, prevention forms part of every modern cybercrime unit.

The EUCTF has taken the opportunity to elect the new Board Member of the group, which will be held for a period of 2 years by Belgium.