Operation YEHYA was carried out by the Aliens Division of Attica, Greece with the support of Europol’s European Migrant Smuggling Centre (EMSC). Eight persons were arrested, of which seven were members of the organised crime group. Travel documents, computers and money were confiscated. The participating countries worked together in the framework of the EMPACT project targeting Facilitation of illegal immigration in the EU. 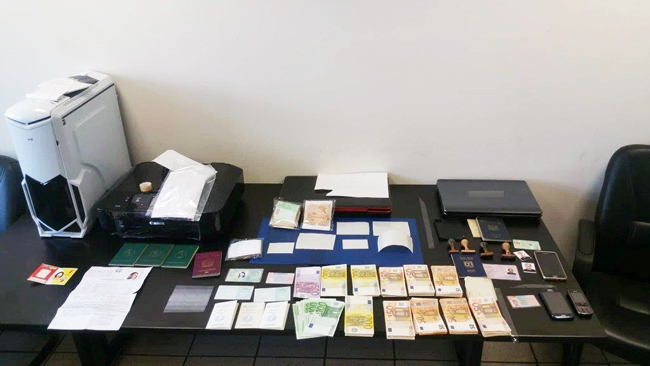 Members of an organised crime group, involved in producing and circulating false/falsified travel documents, which facilitated the illegal movement of migrants from Greece to other countries, was arrested today in Greece.

For the successful outcome of Operation YEHYA, specialized analytical support was provided by Europol’s European Migrant Smuggling Centre (EMSC) and the EMSC experts in the office of Europol in Piraeus, Greece. Europol also provided on-the-spot support through the deployment of a mobile office, enabling real-time access to Europol’s databases.

Second phase: 19-20 December 2017. Eight persons were arrested in various regions of Attica, Greece. Seven of the arrestees were members of the organised crime group (three Iraqis, one Albanian, one Syrian, one Bangladeshi and one Greek national). The ring leaders of the group were among the arrested persons. In addition, one Iraqi national was arrested, with a court decision against him for attempted robbery.

Eight house searches were carried out, and the following objects were confiscated:

Regarding the modus operandi, the organised crime group had the facility to produce false documents or to falsify genuine ones, mainly travel documents. These documents facilitated the illegal movement of migrants from Greece to other countries. The documents covered a huge number of countries and varied in price, according to their country of origin.

The organised crime group used a cafeteria in the city centre of Athens as a meeting point for the members of the group and as a place for networking among the interested migrants and the wholesalers. Close to the cafeteria, the group had an apartment, which was used as a storage place for the documents.

Following the investigation, a high number of cases of illegal circulation of the documents were detected. The illegal profit of the organised crime group estimates more than EUR one million.

The arrested persons were taken to the Prosecutor.