Ensuring European security: more than the sum of its components 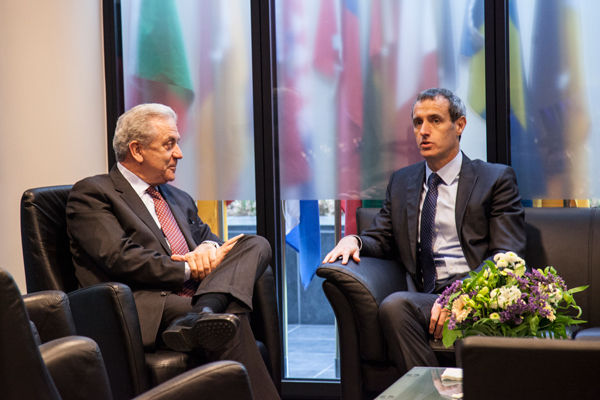 Europe needs no reminder about the imminent threat of terrorism. The recent events in Paris, in Stockholm and London, but also Berlin, Nice, Brussels and Paris before, underscore in the most tragic way that we live in volatile and dangerous times. Individuals both from within our societies and from outside, consider innocent European citizens as targets. In this environment, we cannot remain passive. Our best response will come through unity of purpose, and action.

But terrorists do not hold all the cards. Last week, Spanish police arrested nine terrorist suspects in an investigation coordinated with Belgian authorities and, in London, a man was prevented from committing a knife attack – to some extent thanks to collaboration between countries and the effective and timely exchange of information between them.

National security authorities lead these investigations, but this is not a task they can, or should, pursue in isolation. The threats Europe face do not stop at national borders. Fragmentation makes us all collectively more vulnerable.

European security is more than the sum of its component parts. The European Counter-Terrorism Centre at Europol was created to allow investigators to build a holistic information picture on threats, link to investigations in other Member States and connect the dots on other terrorist organisations based outside Europe. The same logic led to the creation of E to coordinate our work on cybersecurity.

The so-called self-radicalised 'lone wolf' presents a particular challenge – first because experience shows that they are rarely really 'lone'. Recent incidents have shown varying degrees of planning, but the very notion of the 'lone wolf' is something of a misnomer. Nearly all cases show some degree of organisational design. Recent attackers often had criminal records, rich curricula vitae in petty crime and violence and some even links to serious organised crime groups. Patterns are strikingly easy to establish. Europol is now the platform to facilitate cooperation between national authorities to fight this phenomenon, to bring to light connections which might have otherwise gone missing. Our Member States increasingly acknowledged this fact, and it is not accidental that information sharing through Europol has increased ten-fold since 2014.

The internet is the critical battleground in our fight against terrorism, both in terms of terrorist recruitment and operational planning. Daesh is losing territory on the ground but its poisonous ideas still hold sway, and the internet has become its megaphone. Internet companies have therefore a key role to play, and have become invaluable partners in our effort. When Facebook, Google, Twitter, Microsoft and others remove terrorist content from their platforms, we cut the reach of terrorist organisations. A major operation last week resulted in the identification by Europol, and removal by internet companies, of around 2.000 pieces of terrorist and violent extremist online content in six different languages, hosted on 52 online platforms. This week sees the culmination of months of work to ensure that such operational cooperation in Europe can continue to function. Last Saturday, an agreement was signed between Europol and Denmark to ensure that essential cooperation can continue despite Denmark’s ‘opt out’ from certain EU measures. Under this agreement, Danish officers will be deployed to ensure that checks can continue to be made between Danish and European databases.

On Monday, the new Europol rules framework became applicable, modernising the agency’s information management rules and allowing greater value to be derived from the data it holds. At the same time, these rules will further strengthen Europol’s already robust transparency and accountability arrangements, with the creation of a Joint Parliamentary Scrutiny Group representing the European Parliament and national parliaments across the EU. Data protection supervision will also be bolstered. Europol can also expand its cooperation with key third countries such as Turkey, the United States and the Western Balkans region.

The threats we face today in Europe, and beyond, will not go away any time soon. We must be ready. Pulling together is the only option we have. In just a few years, in the face of these threats, we achieved a paradigm shift in our cooperation in Europe, and Europol is the showcase. We now need to make sure that we use it to the fullest to achieve its mission in service of our citizens.