Operation OPSON VI, the joint Europol-INTERPOL operation targeting counterfeit and substandard food and drink, as well as the organised crime networks behind this illicit trade, has resulted in the seizure of 9 800 tonnes, over 26.4 million litres, and 13 million units/items worth an estimated EUR 230 million of potentially harmful food and beverages ranging from every day products such as alcohol, mineral water, seasoning cubes, seafood and olive oil, to luxury goods such as caviar.

This year, 61 countries (21 EU Member States) took part in operation OPSON VI, which was carried out for the sixth time in a row and saw an increase in participating countries (57 countries in 2016). Each participating country implemented a national operational phase between 1 December 2016 to 31 March 2017, involving police, customs, national food regulatory bodies and partners from the private sector. More than 50 000 checks were carried out at shops, markets, airports, seaports and industrial estates.

"OPSON VI confirmed the threat that food fraud represents, as it affects all types of products and all regions of the world. In addition we saw some new trends such as counterfeit mineral water. Once again the good cooperation on a European and global level was paramount to disrupt the criminal gangs behind the illicit trade in counterfeit and unregulated food and drink," said Chris Vansteenkiste, head of Europol's Intellectual Property Crime Coordinated Coalition - IPC3.

“This operation has once again shown that criminals will fake any type of food and drink with no thought to the human cost as long as they make a profit. Whilst thousands of counterfeit goods have been taken out of circulation, we continue to encourage the public to remain vigilant about the products they buy,” said Françoise Dorcier, Coordinator of INTERPOL’s Illicit Goods and Global Health Programme.

The annual operation coordinated by Europol and INTERPOL is supported by customs, police and national food regulatory bodies in addition to partners from the private sector. Since its first edition in 2011, the number of countries taking part in OPSON has grown every year.

The German OPSON VI operation focused on undeclared peanuts, cashew nuts and almonds in hazelnut products imported to Germany. Germany identified products which could be harmful for allergy sufferers. When 1 300 kg of roasted chopped hazelnuts were checked, German authorities detected 8% of admixed peanuts. In 500 kg of hazelnut paste, up to 45% of mixed cashew nuts were detected. In another hazelnut paste, 27% of admixed almonds could be determined. Due to the fact that these products were not labeled regarding the content of allergenic substances a potential health risk for allergy sufferers was given and the products were withdrawn from the market.

0 seasoning cubes illegally bearing a famous trademark. The products were discovered during the search of a wholesaler premises, located in the suburban area of Paris. Customs initiated the case upon intelligence received from the industry. The company owner of the brand confirmed the products were counterfeit. Goods were quickly disposed according to the simplified destruction procedure. Investigations are ongoing to identify origin, route and final destination of the items.

The Portuguese Food Safety and Economic Authority (ASAE) raided a factory in the area of Porto which resulted in the finding of processed fish manufactured without respect of safety rules. This outcome was achieved after several weeks of investigation and surveillance work. The plant was targeted as its licence to process food had been already withdrawn. ASAE uncovered illicit activities consisting in repacking almost expired sardines in tomato sauce, regardless of traceability and hygienic rules. Products were intended for exportation and intra EU deliveries. The business has been closed immediately after the action day. All material found in the premises was seized, namely 311 000 cans, 16 jars of tomato sauce, 9 900 packing boxes, 24 730 labels and 700 Kilos of salt.

Italian Carabinieri NAS in cooperation with the Ministry of Health seized more than 266 000 litres of mineral water (almost 32 000 bottles) in the area of Lazio. Bottles imitated a registered trademark of mineral water. Labels and shapes of the plastic containers were similar to the genuine products. Investigations revealed that the water originated from the same source. However, no market authorization had been granted and bottling was done without regards of health and safety regulations. One person was arrested.

In Tuscany, Italian Carabinieri dismantled an Organised Crime Group (OCG) involved in the production and distribution of fake wine, sold as famous and protected red wine (Protected geographical indication of origin). The investigation was coordinated by the antimafia regional unit of Florence. In total, 13 persons have been identified and 3 of them arrested. In the OCG, each individual was in charge of specific tasks regarding production and distribution of the bottles. Pure alcohol was added to low quality wine used as raw material to increase the volume of alcohol. Labels, including fake official labels of protected geographical indications were placed on the bottles at the final stage of production. These illicit activities took place in a farm located in the Tuscan countryside. The property has been seized. Wine was sold on the Italian market and abroad. 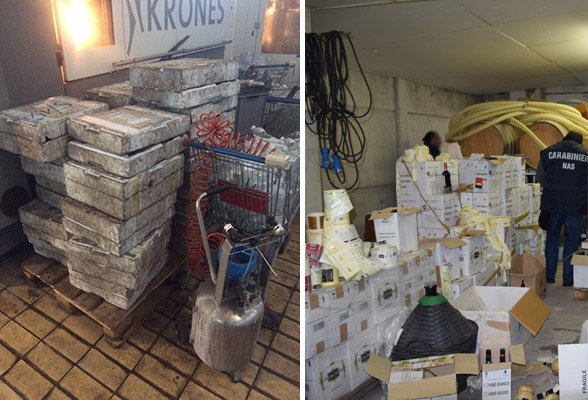 The Danish Veterinary and Food Administration performed analysis of different samples of olive oil sold in Danish supermarkets to check their compliance with labelling rules. Results showed that numerous samples were not virgin olive oil as presented but blended or lampante oil. Most of the companies voluntarily removed the bottles from markets. The OPSON VI results showed that olive oil can be considered as a high risk product for falsification or adulteration. This year, Norway and Austria also carried out inspections on olive oil. In November 2016, Europol organised a specific training on virgin olive oil to help the participating countries to better detect infringements on olive oil.

In March 2017, the Financial and Economic Crime unit of the Ministry of Finance discovered two illicit storage sites of alcohol. The investigating team placed the premises under surveillance and started their action by checking delivery vehicles entering the site. All products were smuggled mostly from Bulgaria, thus evading excise duties. Almost 1 300 litre of smuggled alcohol (vodka and whisky) was seized and 5 persons were arrested.

After three months of investigation, the Environmental Crimes Unit of Guardia Civil (SEPRONA) arrested four individuals working in a company selling clams unfit for human consumption. The cleaning of the clams was not compliant with safety rules, as the clams were not treated for purification. The company used false labels of an existing authorized treatment centre to deceive consumers. Moreover, the company lied about the species of clams, pretending they originated from Portugal. During the search of the company, 530 kg of unfit clams were seized.

An Garda Síochána, Ireland's National Police Service stopped a van which they had under surveillance for a period of time. When the vehicle was searched a large quantity of unrefrigerated, unpacked, unlabelled meat and other products were discovered along with alcohol and tobacco. The van was seized and Customs Officers were granted a warrant in the district court to search the home address of the occupants. The food included frozen cooked smoked chicken and various jarred produce containing fruit, vegetable, soup sauce, jams, preserves and condensed milk, totalling 1096 pieces.

A final and detailed report on the results of the operation OPSON VI will be published in the next months.