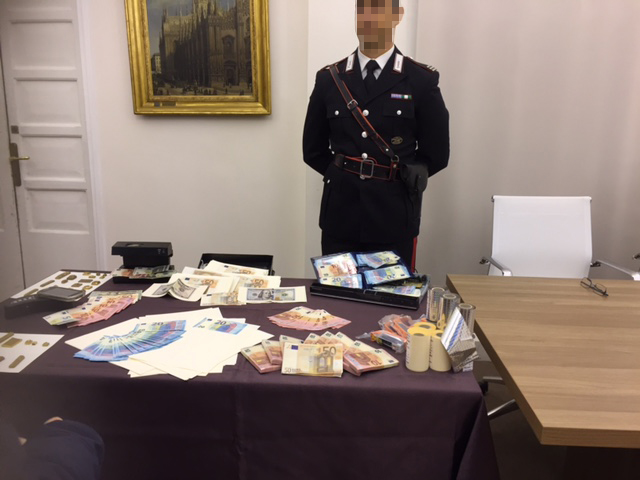 On 13 December, the Comando Carabinieri Antifalsificazione Monetaria with the support of Europol, dismantled an illegal counterfeit currency print shop in Melegnano (Milano).

In this print shop, the criminals counterfeited euro banknotes (the new 5 euro, 10 euro and 20 euro notes), as well as US dollar banknotes. Coordinated investigations by the Public Prosecutor at the Court of Naples (Tribunale di Napoli Nord) saw the neutralising of a criminal network involved in the production and distribution of counterfeit currency, which covered large areas of national territory and most EU Member States.

Those arrested were part of an organised crime group that usually operates from the Italian region of Campania. For many years, currency counterfeiting activities in Italy were concentrated in the area of Naples, Caserta and surrounding provinces. The operation in Melegnano has confirmed the trend for relocating the production of counterfeit currency away from the provinces of Naples and Caserta.

During the raid in Melegnano, the Italian authorities, supported by Europol, found and seized printers, inks, punching dies, foils and other equipment for the production of counterfeit euro and US dollar banknotes. Overall more than 1000 counterfeit banknotes were found on the premises of the print shop.

The print shop, which was dismantled today, was capable of producing euro banknotes that were quite deceiving for the public. This operation shows that continuous efforts in different areas are needed to stop criminals from counterfeiting currency and that close cooperation is the key to a successful operation.