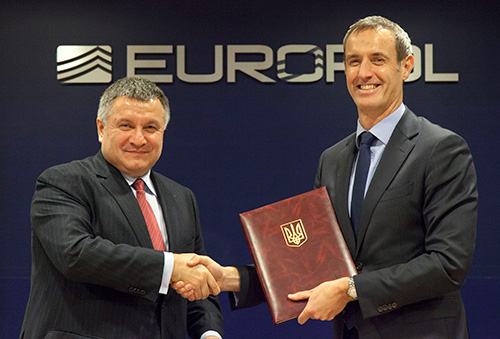 Ukraine’s Minister of Internal Affairs, Arsen Avakov and Europol's Director, Rob Wainwright, today signed an operational and strategic agreement to expand cooperation to combat cross-border criminal activities. Aware of the urgent problems arising from international organised crime, especially terrorism, and other serious crimes, the agreement allows for the exchange of information, including personal data of suspected criminals, and the joint planning of operational activities.

The signing of the Agreement on Operational and Strategic Cooperation concludes the successful negotiations between Ukraine and Europol on how to effectively join forces to fight serious and organised crime. After entry into force of the agreement, this new level of cooperation will be important for tackling priority crime areas affecting both the European Union and Ukraine, such as drug trafficking, counterfeit goods and illegal migration.

The text of the cooperation agreement between Europol and Ukraine was approved by the Council of the European Union and backed by the European Parliament, and was signed on 14th December in The Hague.