This year marks a milestone in the rights of the children as the United Nations Convention on the Rights of the Child turns 30. This Convention, which was adopted by the UN General Assembly on 20 November 1989, is the cornerstone of international protection of children’s rights. 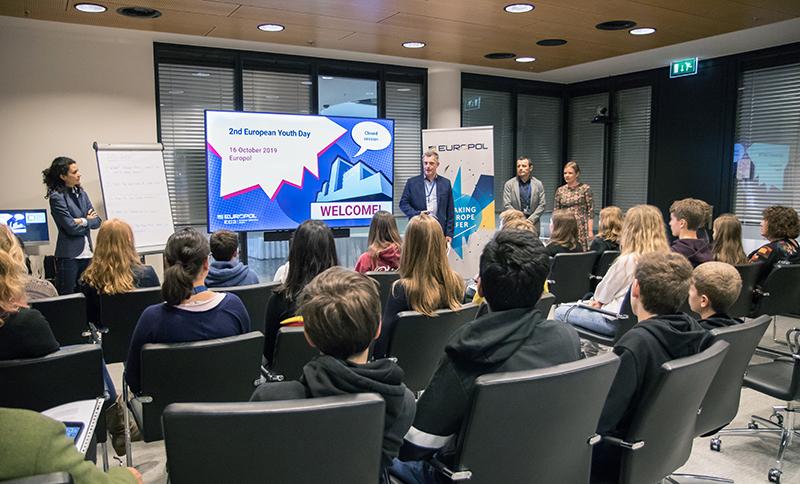 Europol’s European Cybercrime Centre (EC3) joined the celebrations this year by organising earlier in October the second European Youth Day, the theme of which was “Say No! It’s your life!”.

Building up on the work initiated last year, this event brought together at Europol’s headquarters for a half-day 19 students aged 13 to 15 from the European School  The Hague (ESH) and the International School of The Hague (ISH). This event offered a unique platform for youngsters to make their voices heard on online and offline safety issues.

The students were divided in small groups, allowing for an interactive exchange with Europol’s experts on the following two topics:

The group was also briefed on the law enforcement reaction to their 2019 Call for action, a document distributed to all EU Member States and partner organisations, in order to amplify the voices of the youth.

The number of young people accessing the internet has grown significantly in the past years. As stated by the Internet organised Crime Threat Assessment (IOCTA) 2019, the online solicitation of children for sexual purposes remains a serious threat. As offenders become more aware of anonymisation techniques, law enforcement authorities and industry partners fighting these disturbing crimes continue to face considerable challenges.

The European law enforcement community launched back in 2017 a campaign, #SayNO to online sexual coercion and extortion, coordinated by Europol, to give advice to youngsters who have been, or are likely to be targeted, and to strengthen reporting and support mechanisms.

The campaign includes a short film, available in all EU languages, which helps people to recognise a potential sextortion approach, provides online advice and highlights the importance of reporting the crime to the competent national authorities.

This awareness-raising campaign has been a resounding success throughout Europe. Earlier this month, the #SayNO video in Czech language hit over 400 000 views on Youtube. As a result, the National Organised Crime Agency of the Czech Police was awarded an award by the Ministry of Interior of the Czech Republic for the successful implementation at the national level of this campaign.

Read more about the #SayNO campaign.