These are some of the main points highlighted in the Strategic Report How Illegal Drugs Sustain Organised Crime in the EU, which Europol releases today. The report provides a concise overview of the illicit drugs market in the EU and was published on the occasion of a high-level conference at Europol to discuss enhancing the fight against illegal drugs.

Europol’s Deputy Executive Director of Operations Wil van Gemert: “The illicit drugs market remains the largest criminal market in the EU. More organised crime groups are active in the production, trafficking and distribution of illicit drugs than any other phenomenon. Moreover, drug markets are increasingly diversified and globalised, and interrelate more and more with other illicit and criminal markets and activities. The latter include, although not systematically, terrorism. Fortunately, in recent years cooperation between law enforcement authorities to fight serious and organised crime, be it drugs or any other crime area, is improving and providing grounds for good results in dismantling organised crime groups and networks.”

On 6 and 7 December 2017, the Heads of Drugs Units of all EU Member States, representatives of the EU Commission and EU agencies such as Eurojust and the European Monitoring Centre for Drugs and Drugs Addiction (EMCDDA) as well as the United States Drug Enforcement Administration (DEA) , other operational partners and 10 third countries with operational agreements with Europol  will gather at Europol to identify and discuss the implementation of new ways to tackle the trade in illegal drugs, which is one of the most threatening criminal phenomena in the EU. The conference complements the evaluation of the implementation of the EU Drugs Strategy 2013-2020 and the EU Action Plan on Drugs 2013-2016 by the European Commission.
According to this evaluation, available evidence shows that there has been at least some progress in all EU Action Plan actions aimed at drug supply reduction, however, a significant reduction in the supply of drugs was not recorded in recent years. Building on the findings of the evaluation, the new Action Plan on Drugs 2017-2020 provides a strengthened response to the newly-emerging health and security challenges in the area of illicit drug use and trafficking.

Europol is the EU’s law enforcement agency and assists the Member States in their fight against serious international crime and terrorism. Established as an EU agency in 2010, Europol, the European Union Agency for Law Enforcement Cooperation, is at the heart of the European security architecture and offers a unique range of services. Europol is a support centre for law enforcement operations, a hub for information on criminal activities as well as a centre for law enforcement expertise. Europol closely collaborates with the European Monitoring Centre for Drugs and Drugs Addiction (EMCDDA) in the fight against illicit drugs. 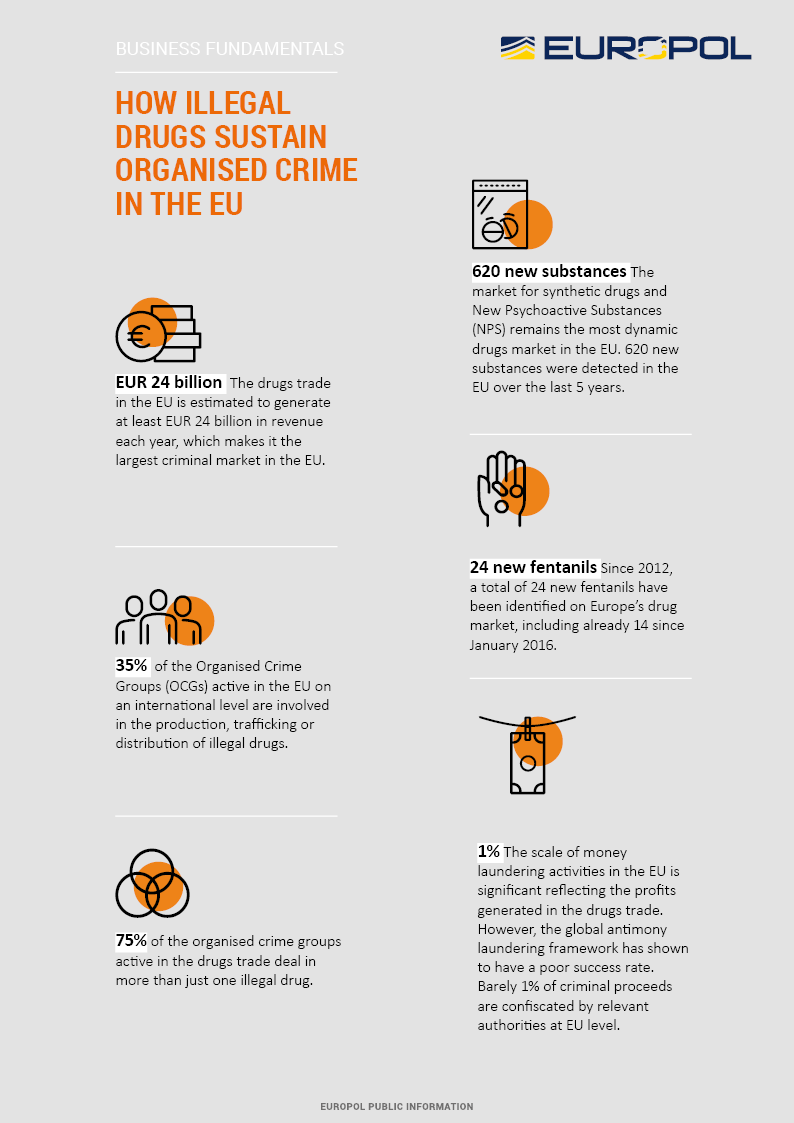