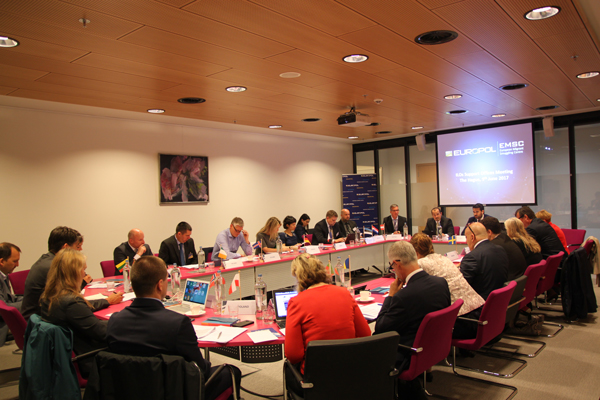 On 9 June 2017, Europol’s European Migrant Smuggling Centre, as part of the tasks emerging from the Malta Declaration and associated Implementation Plan, organised an expert meeting focusing on cooperation and information exchange in tackling migrant smuggling networks operating from source and transit countries, with a specific focus on North Africa and the Central Mediterranean route.

The meeting brought together representatives from the (Immigration) Liaison Officers’ support units from 17 EU Member States as well as the European Commission.

In line with the most recent policy documents, the discussions focused on better exploiting and fine tuning existing resources and mechanisms, such as the bilateral (immigration) liaison officers already deployed in third countries and regional cooperation platforms.

The debates were enhanced by the contributions delivered by, among others, experts from the European Commission highlighting the dynamics of the political developments in the field as well as indicating its future plans. Europol’s new legal framework and the opportunities for cooperation and information exchange also featured, as did the state of play on Europol’s implementation of the objectives of the Malta Declaration.

Specialists currently deployed as Liaison Officers – Spanish Attaché in Libya and UK Liaison Officer in the Netherlands – provided the audience with examples of hands-on best practice and a practical approach to information exchange and cooperation.

Throughout the event it transpired that effective action in this field is heavily dependent on greater cooperation among origin, transit and destination countries, as well as on swift information exchange between law enforcement partners and EU Agencies. Migrant smuggling represents an ideal opportunity for national resources already invested by the Member States in fostering cooperation with the source and transit countries, to successfully balance the collective efforts undertaken by the EU to tackle this rapidly developing phenomenon.

All participants concluded that migrant smuggling cannot be dealt in isolation; it requires a multidisciplinary approach and concentrated efforts from all relevant stakeholders.