Human trafficking ring taken down by Spanish and Bulgarian Authorities 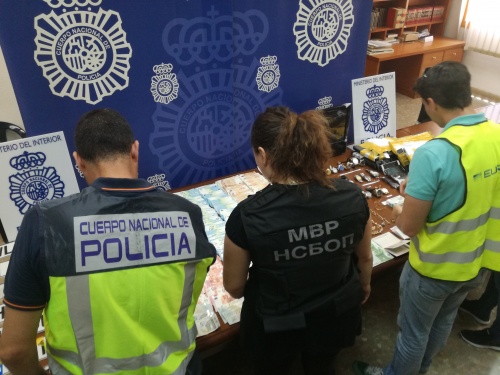 A large-scale joint investigation, led by the Spanish National Police in cooperation with the Bulgarian police, and supported by Europol and Eurojust, has resulted in the dismantlement of an international organised crime group involved in trafficking young Bulgarian women to Spain for the purpose of sexual exploitation. As a result of the investigation, 34 individuals were arrested (26 in Spain and 8 in Bulgaria) and 13 victims of sexual exploitation safeguarded.

A joint investigation by the Spanish National Police and the Bulgarian Police, with the support of Europol and Eurojust, has led to the dismantlement of a criminal network of Bulgarian origin involved in human trafficking. The network aimed at taking control of the prostitution industry in the Malaga cities of Torremolinos and Marbella (Spain).

In a coordinated law enforcement action, 34 suspects were arrested (26 in Spain and 8 in Bulgaria) and 13 victims of sexual exploitation safeguarded. In total, 36 searches were carried out (21 in Málaga, Spain, and 15 in Bulgaria) that resulted in the seizure of EUR 50 000 in cash, 12 luxury watches and a significant amount of drugs.  Judicial authorities also ordered the seizure of 6 properties and 18 vehicles, some of them luxury ones, as well as the freezing of numerous bank accounts.

The investigation began in 2014, when the Spanish authorities detected the existence of a human trafficking group which operated in Spain and had international links with Bulgaria. Given the dimension of the criminal network under investigation and its international character, a Joint Investigation Team (JIT) formed by Spain and Bulgaria, supported by Europol and Eurojust, was set up. The excellent police and judicial cooperation led to the identification of new victims, the roles of the different members of the organisation and their modi operandi.

The criminal gang aimed at gaining total control over the prostitution industry in the regions of Torremolinos and Marbella in Southern Spain. They recruited vulnerable women in Bulgaria by luring them with the promise of a better life, either by abusing their precarious financial situation or by resorting to other known recruitment methods like the “lover boy”. Once they arrived to Málaga (Spain), the victims were taken to different apartments in the city of Torremolinos and forced to practice prostitution in the Marbella area of Puerto Banús. The gang used violence and threats against the victims and their families, as methods of coercion. The victims were also forced to steal their clients’ cash, credit cards or other valuable objects, sometimes by spiking the clients’ drinks.

Europol and Eurojust have provided support throughout the entire investigation. Europol facilitated information exchange and organised an operational meeting to plan and prepare the executive actions. On the action day, Europol provided on the spot support by deploying two human trafficking experts to Spain, equipped with a mobile office. This allowed for real-time intelligence analysis and cross-checks against Europol’s databases.

By combining the sexual exploitation with forced criminality, the criminal group obtained huge profits. Clients were charged with the sexual services provided by the victims and at the same time being robbed of whatever cash and valuable objects they had with them. The objects were channelled to local pawnshops linked to the group and responsible for converting them into cash which was used either to purchase high value cars or transported back to Bulgaria and reinvested in other assets or activities.