The Spanish Guardia Civil, with the support of Europol and Ameripol, dismantled a criminal group illegally trading used tyres in several countries across Africa, America and Europe. 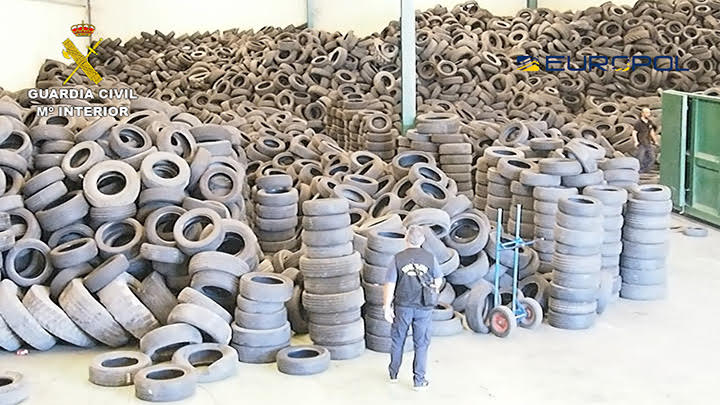 As part of Operation ROTAMM, the Guardia Civil dismantled a criminal group operating from Spain that acquired used tyres and sold them illegally in Africa, America and Europe. The operation involved 17 countries from the 3 continents. It is estimated that the criminal organisation could have obtained net profits amounting to nearly EUR 2 million.

As a result of the investigations, nine people were arrested. In addition, criminal charges were pressed against another five individuals under investigation and 17 houses were searched. Investigators believe that this group could have been illegally moving more than 200 000 tyres over the last five years.

The network acquired the used tyres in Spain and other European countries, particularly where tyres are generally changed early. Once in Spain, the tyres that were meant for disposal were instead sold to low-income third countries to be reused on vehicles.

Europol supported the investigation for six months and provided technical support, international coordination, reports and analysis on any new information received. This coordination was essential, as the commercial transactions involved countries such as Bulgaria, Germany, France, Poland and Portugal.

"Environmental Crime for the purpose of illicit waste trafficking is a serious offence that results in substantial damages to the environment and generates hundreds of millions of euros in criminal profits," Jari Liukku, Head of Department of the European Serious and Organised Crime Centre at Europol stated. "In the EU, the trafficking of illicit waste is typically carried out by major organised crime groups operating globally with the assistance of legal business structures, corruption and money laundering activities. In the fight against organised crime, international police cooperation is paramount. This case represents yet another success of Europol’s international approach, but enormous challenges still lie ahead."