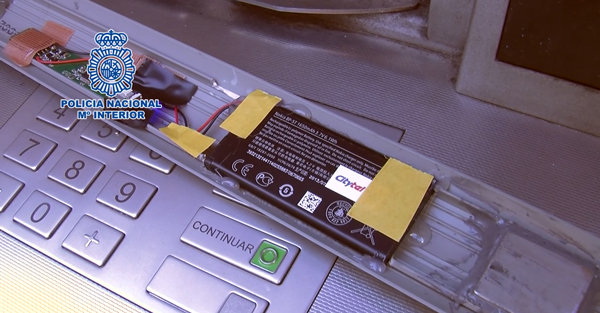 A successful operation that took down an international criminal network of payment card fraudsters was carried out by Central Investigating Judge number 5, the Public Prosecution Office at the Audiencia Nacional and National Police of Spain, and the General Directorate Combating Organized Crime in Bulgaria, with the support of Eurojust and Europol’s European Cybercrime Centre (EC3).

As a result of the cross-border action, 31 suspects were arrested (21 in Spain, 9 in Bulgaria and one in the Czech Republic) and 48 house searches (14 in Spain and 34 in Bulgaria) were carried out. The suspects were in possession of equipment used to forge payment cards, payment card data readers-recorders, skimmers, micro cameras, devices to manipulate ATMs, as well as cash and numerous counterfeit cards.

Between 2014 and 2017, the criminal network installed skimming devices on an average of 400 ATMs every year, to copy and clone the data contained on the bank cards. The forged cards were then used to make illegal transactions in 200 ATMs outside the European Union, mainly in the USA, the Dominican Republic, Malaysia, Indonesia, Vietnam, Peru, the Philippines and Costa Rica. Approximately 3 000 EU citizens were affected by the criminal network, with losses of at least EUR 500 000.

During the investigation, Eurojust ensured close contacts and coordination among the prosecuting and investigating authorities in Spain and Bulgaria. Europol supported the case by providing tailored intelligence analysis and expertise to the investigators and deploying mobile offices on the spot to Spain and Bulgaria. Several coordination and operational meetings took place prior to the action at Eurojust and Europol. Due to the demanding investigative measures run on an international level, a joint investigation team (JIT) was set up between the cooperating countries with the assistance of Eurojust and Europol.

Francisco Jiménez-Villarejo, National Member for Spain at Eurojust, said: ‘This successful operation confirms Eurojust’s commitment to protect the assets of EU citizens from falling into the hands of cyber fraudsters. An entire criminal network was taken down and, as a result, is no longer able to defraud innocent victims, thanks to the joint efforts of the Spanish and Bulgarian prosecuting authorities, and the valuable support provided by their National Desks at Eurojust.’

Kamen Mihov, National Member for Bulgaria at Eurojust, said: ‘The joint operation as very successful. The level of coordination in the context of the JIT was swift, very professional and result-oriented. We highly appreciate the high level of expertise of our colleagues in the Specialised Prosecutors’ Office of Bulgaria as well as the best practice used in dismantling of this complex OCG.’

Steven Wilson, head of EC3 at Europol, said: ‘Police forces in the EU are utilising Europol’s unique tools to ensure that electronic payment transactions are made safer. We are continuously investing more resources into this vital support platform, and now we are seeing the results of this essential work.’