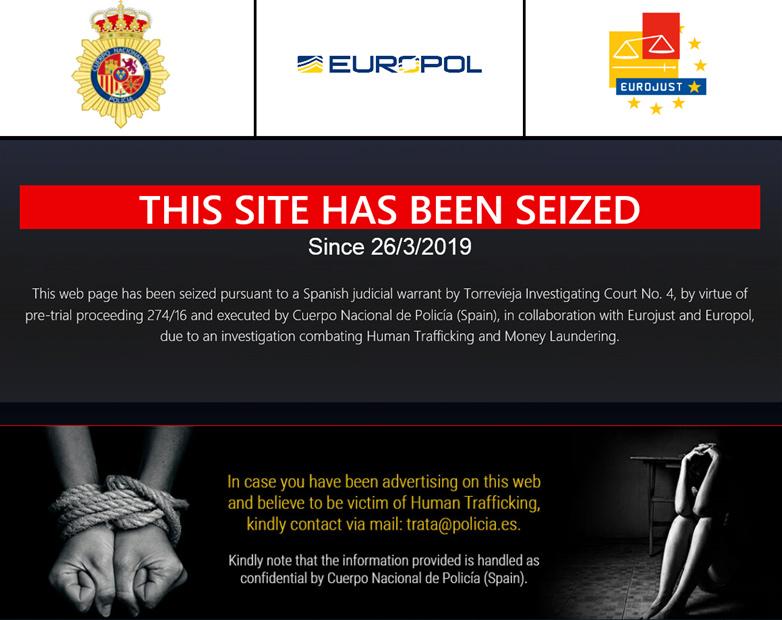 Operation Webmaster targeted a Finnish organised criminal group involved in human trafficking for sexual exploitation and money laundering. The joint operation led to six arrests, 16 website shutdowns and multiple seizures of cash and luxury goods. Following the action day on 26 March 2019, the suspects’ bank accounts in 12 different countries were frozen. With support from Europol and Eurojust, the Spanish National Police (Policía Nacional) joined forces with national authorities from 14* other countries to bring down the trafficking ring.

Sex trafficking websites for the Nordic market operated from Spain

Spanish authorities opened an investigation in 2016 targeting a Finnish national suspected of human trafficking for sexual exploitation and money laundering. The main suspect, based in Marbella, Spain, was allegedly managing websites advertising sexual services. The operation was triggered by an investigation into an organised crime group trafficking victims of predominantly Nigerian origin. The website was advertising services of victims from different countries based in Sweden and Finland. Other organised criminal groups involved in similar activities were also advertising the services of their victims on these websites.

The suspected leader of the criminal group was carried out criminal activities in at least 15 countries. He used intermediaries to channel criminal proceeds to international multi-currency bank accounts. In addition to using foreign companies and bank accounts, the money laundering scheme also included relatively small investments in cryptocurrencies.

A Joint Investigation Team was set up between Finland, Spain and Sweden to speed up the investigations. European investigation orders have been issued to Bulgaria, Estonia, Germany, Malta, Romania, the Netherlands and the United Kingdom. Issuing International Letter of Requests to China, Panama and Russia facilitated the financial investigation into the money laundering scheme.

Europol has supported the joint investigation by organising coordination and operational meetings and providing analytical support since the establishment of the Joint Investigation Team in 2016.

Europol supported the action day by deploying experts in fighting human trafficking, cybercrime and asset recovery to three of the countries involved in the operational activities to cross-check operational information in real time against Europol’s databases. Europol activated the Virtual Command Post at the Coordination Centre set up at Eurojust to coordinate the action and supported the seizure of the online domains, collaborating with US hosting service providers. Europol also prepared the ‘splash’ page appearing on the website after the domain seizure.