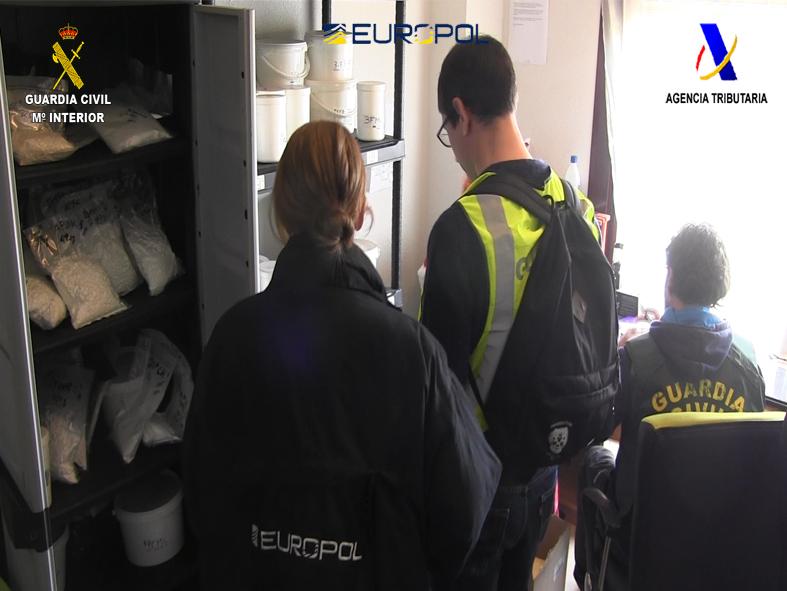 The Spanish Guardia Civil and the Austrian Federal Police, supported by Europol, have dismantled a criminal network producing and distributing synthetic drugs worldwide, known as new psychoactive substances (NPS), on the Darknet. The criminal group was also involved in money laundering their share of the profits by selling cryptocurrencies, mainly Bitcoins. More than EUR 4 500 000 in Bitcoins, IOTA and lumen was seized by law enforcement authorities.

Over 100 different types of NPS were seized in two laboratories in the provinces of Granada and Valencia in Spain, whose market value would exceed EUR 12 million. Nearly 800 000 doses of LSD were confiscated, marking the biggest ever haul of this type of substance and derivatives in the European Union (EU). Europol supported the action day with two mobile offices in Spain and Austria. Analytical support was provided during the whole operation.

Synthetic drugs sold in the Darknet and shipped by post

The organised crime group had been operating in Spain since 2012 and imported the raw material to make the psychoactive substances from Asian countries, mainly China. The organisation installed a laboratory in Amsterdam, which served as the production unit of the synthetic drugs. From this laboratory the narcotic substances were shipped to two other laboratories in Spain (Granada and Valencia), which were directly managed by the organisation and where the drugs were packaged and distributed to the final consumer.

Packages and postal envelopes were sent to more than 100 different countries, containing narcotic substances camouflaged as other legal products, such as additives for cement. Among the substances that were distributed were more than 100 different types of NPS: synthetic cannabinoids, depressants, dissociatives, stimulants such as amphetamines or cathinones, nootropics, psychedelics and synthetic opiates, the latter a grave problem in developed countries like the USA.

The organised crime group offered the synthetic drugs exclusively through Darknet webpages where access was restricted to previously invited users redirected from forums. Two of the webpages managed by the organisation enjoyed a great reputation, being the most known and exclusive worldwide in this field.

Big business on the Darknet

Drug trafficking is big business, bringing in a fifth of all profits from organised crime. The market for synthetic drugs runs into the billions of euros each year and the sophistication of producers and traffickers continues to rise. Over the last decade, illegal online markets have changed how drugs are bought and sold. Criminal activity on the Darknet has become more innovative and more difficult to predict. Darknet markets provide a largely anonymous platform for trading in a range of illicit goods and services. It is estimated that around two thirds of the offers on Darknet markets are drug-related.

Illicit trade on Darknet markets is one sign of the increasingly complex nature of transnational organised crime in the EU. In 2017 Europol and the EU drugs agency EMCDDA published Drugs and the Darknet: perspectives for enforcement, research and policy, a report which presents the latest understanding of how Darknet markets function, the threats they pose to health and security and how Europe can respond.

According to the report, market disruption should form part of a broader, more integrated set of measures implemented as part of an overall strategy to address drug trade in the Darknet ecosystem. Darknet investigation teams modelled and promoted by Europol will be at the heart of such an integrated strategy. Engagement with key industries (e.g. information technology, social media, payment and product distribution services) will be increasingly important for identifying and responding to new threats in this area.