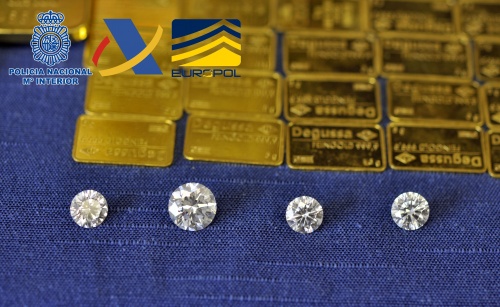 The operation resulted in 14 arrests in Spain and 2 in Bulgaria. Four diamonds worth EUR 2.6 million and 720 gold coins worth EUR 1.1 million were seized by Spanish law enforcement authorities, alongside EUR 390 000 in cash, 14 luxury watches, 14 orthodox icons, 1 luxury vehicle and 3 weapons. In addition, a virtual wallet containing EUR 220 000 in cryptocurrencies was blocked and several bank accounts in Spain and Bulgaria were frozen.

The investigation began when the Spanish authorities detected an organised crime group dedicated to money laundering, home burglaries and drug trafficking. The criminal network – led by a Bosnian citizen and composed of Spanish, Colombian and Bulgarian nationals – had been operating since 2008.

The arrestees had accumulated a vast amount of precious metals, mainly gold and luxury watches, which had been taken during home burglaries. The metals were fused together in a crude and fraudulent way to then be sold on the legal market. The proceeds generated from the sales were then invested in real estate, artwork and cryptocurrencies. 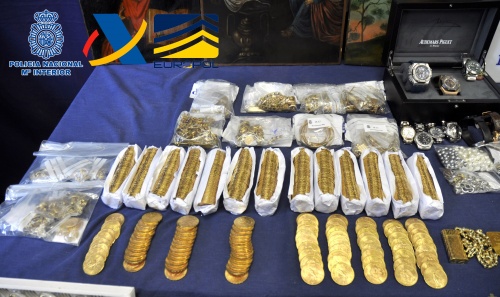 Europol supported the investigation by facilitating information exchange between Spain and Bulgaria. In a Joint Action Day on 8 May 2018, 21 house searches were carried out in Spain and 3 in Bulgaria. Europol supported the actions on the ground by deploying two experts to Madrid equipped with a mobile office and a Universal Forensic Extraction Device (UFED). Information gathered during the course of the action was analysed and exchanged in real time. The data extracted from the mobile devices will be cross-checked against Europol databases.

The arrestees are accused of belonging to a criminal organisation, money laundering, document fraud, drug trafficking, burglaries and unlawful possession of firearms.