Intensive cooperation and coordination between enforcement authorities at EU level has led to the seizure of millions of fake and possibly harmful products and has helped to take down several transnational criminal networks.

As a result of the IPC3’s success to date, the EUIPO has doubled the funding available to the unit, to enable it to intensify its work and build on the results it has achieved since its foundation. Its enhanced tasks will include: scanning of the internet; data analysis and processing; and increased training of enforcement authorities.

In 2017 alone, the IPC3 has been involved in 36 major intellectual property crime cases. The unit has coordinated large transnational operations from its headquarters in The Hague, and has extensively assisted cross-border investigations by providing operational and technical support. In addition, on-the-spot support has been supplied by deploying IPC3’s experts to assist the national law enforcement actions in EU Member States, allowing for real-time information exchange and cross-checks against Europol’s databases.

During 2017, over 1 700 secure messages relating to IP crime have passed through the IPC3 hub in Europol, and nearly 1 400 suspects have been investigated.

Some of the major investigations coordinated or supported by the IPC3 this year are:

“IPC3 is a success story, both in terms of its activities and in terms of the support it has given to enforcement authorities both inside and outside the EU. With increased funding, the unit will be able to concentrate on a wider range of tasks, with a view to making the internet a safer place for consumers and businesses.”

“The rapidly-evolving digital world presents big challenges for enforcement officers tackling IP crime that cannot be solved by law enforcement alone. IPC3’s operational successes are the perfect example of how building robust partnerships between the stakeholders involved is vital to effectively combat this crime. We welcome EUIPO’s decision to reinforce its support to the IPC3 and to strengthen its capacity to fight counterfeiting and piracy.’’

The Intellectual Property Crime Coordinated Coalition (IPC3) builds on the strategic agreement between Europol and EUIPO signed in 2013.

EUIPO, the European Union Intellectual Property Office, is a decentralised agency of the EU, based in Alicante, Spain. It manages the registration of the European Union trade mark (EUTM) and the registered Community design (RCD), both of which provide intellectual property protection in all 28 EU Member States, as well as carrying out cooperation activities with the national and regional IP offices of the EU.

Europol is the European Union Agency for Law Enforcement Cooperation. Headquartered in The Hague, the Netherlands, Europol supports the 28 EU Member States in their fight against terrorism, cybercrime and other serious and organised forms of crime. 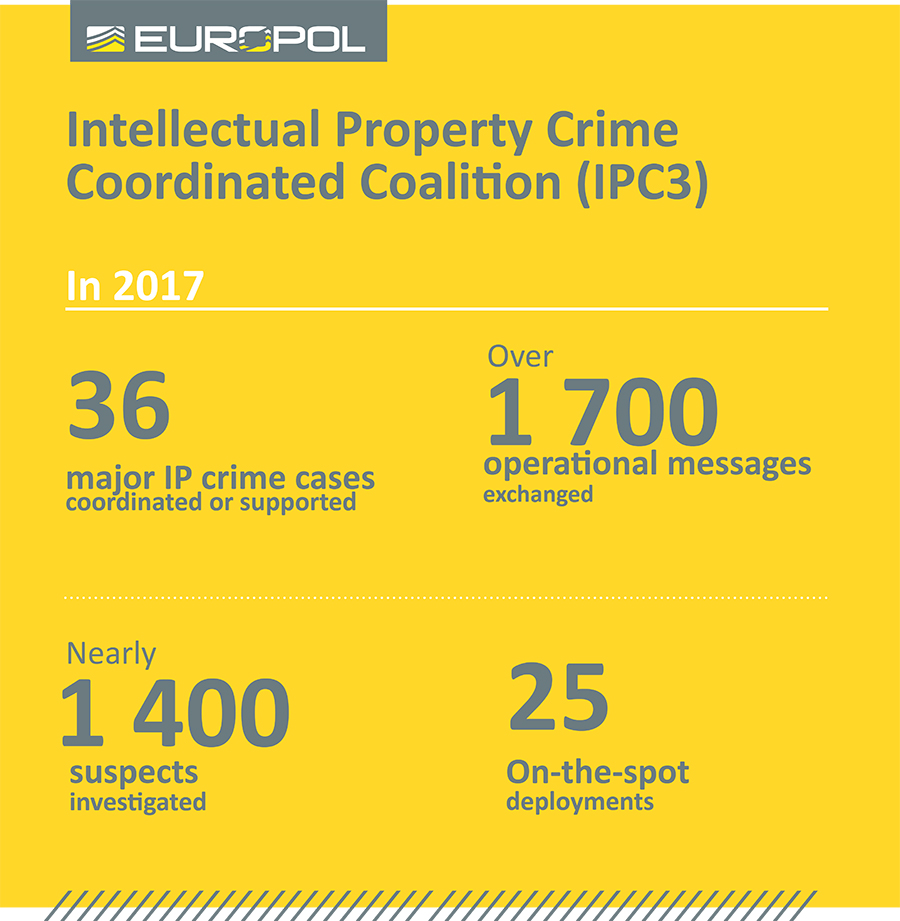