PrintPDF
Denmark (Danish: Danmark) officially the Kingdom of Denmark is a member of the European Union since 1 January 1973. It is a Scandinavian country in Europe, the southernmost and smallest of the Nordic countries, it is south-west of Sweden and south of Norway, and bordered to the south by Germany.

5.5 million (including Greenland and the Faroe Islands)

The police in Denmark, the Faroe Islands and Greenland constitute one national force falling under the Minister for Justice. The Minister exercises his powers through the National Commissioner and the Commissioners of the police districts. The National Commissioner’s Office is in charge of police allocations and administers police personnel, office staff and building maintenance. The administration of the legal personnel of the police is the responsibility of the Ministry of Justice. Denmark is divided into 12 police districts (as well as the Faroe Islands and Greenland). In nearly all police districts there are main police stations, and sub-stations that are manned in the daytime only. In more sparsely populated rural areas there are also beat officers.

To enhance the police effort in local areas, community police posts have been set up in several towns. The objective is to improve security by establishing as close contact as possible with other local authorities and the public. 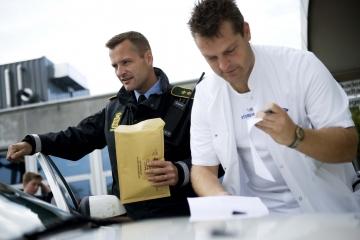 Controlling smuggling entails monitoring traffic between third countries (the EUs external frontier) and the Danish customs area. That also includes drugs controls at the internal frontiers and the control of goods to and from the Danish customs area when an embargo has been imposed for safety, health, veterinary, plant pathological or foreign exchange reasons. These tasks are often performed in close cooperation with other authorities, e.g. the police, veterinary authorities and health authorities. The Customs task comprises the control of approximately 7,000 km of coastline, approximately 400 harbours, several airports with international traffic, and the frontier between Denmark and Germany. Lastly, it includes serving travellers declaring goods. Many of these tasks require a resource-demanding 24-hour service. Controlling smuggling differs in many ways from the majority of other control tasks, which are essentially based on registration matters, declarations, and corporate accounts.